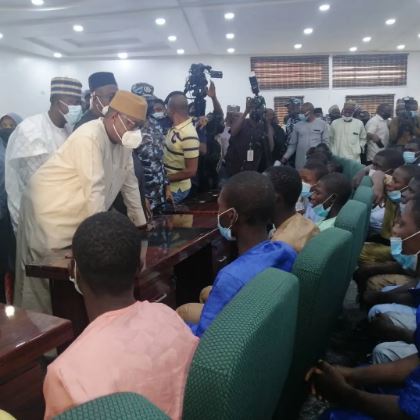 Staff, students and others abducted by gunmen from Government Science College Kagara in Niger State were freed Saturday morning after officials agreed to release four members of the bandits’ gang, sources familiar with the process told Daily Trust on Sunday.The armed gang had attacked the school located in Rafi Local Government on February 17 where they abducted 27 students, 3 teachers, two non-teaching staff and 9 family members of the staff.

After days of working to establish contact with the abductors and subsequent negotiations, the victims were released to a team of police and other security agents around 7am on Saturday.

The victims who were received by Governor Abubakar Sani Bello on Saturday recounted their harrowing experience in the hands of their abductors.

Daily Trust on Sunday gathered from reliable sources that the kidnappers, who operate between Birnin Gwari in Kaduna State, and Rafi Local Government in Niger State, had demanded the release of six members of their group arrested at different times by security agents.

Four of the six named persons, were identified in different detention facilities in Katsina, Kaduna and Niger states.

But a source told a Daily Trust on Sunday that two of the persons identified were released to the bandits before the students were set free.

“The process to perfect release of the other two was being concluded,” the source disclosed Saturday afternoon.

Daily Trust on Sunday gathered that the bandits kept the victims deep in the forests, making it difficult to reach them with ease.

“One of the bandits used in reaching out to the group had to ride on motorcycle for nine hours to go and meet the Kachalla (leader) of the kidnappers. The Kachalla was persuaded to allow the victims to be set free even though not all the persons they wanted out from detention were released.

“Between the leader was and the location they hid the victims it was another long journey. It was therefore difficult even more for the abductees who had to trek for many hours to freedom,” the source said.

Meanwhile, it was a day of emotions for the victims and parents of Government Science College, Kagara, who were abducted by bandits as they recounted their ordeal during their meeting with Governor Abubakar Sani Bello at the Government House, Minna.

An SS3 student, Abubakar Sidi, 21, said the punishment they received depended on the occupation of their parents, adding that they were not fed on the first day of the abduction.

“After feeding us, they told those whose fathers are policemen and soldiers to step aside. The amount of beating you received depended on the occupation of your father. They beat us mercilessly; I wish I died there because the beating was too much. The experience was horrific,’’ he said.

‘My decision to return to school depends on government’

For Mahmood Mohammed, his experience was not different from that of his classmate as the nine days became hell for them.

“I faced hell. It was not easy. I did not know that I would come back. They didn’t take care of us. I am very happy because God has given me the opportunity to be reunited with my family.

“We are happy to see all the government officials who came out in their numbers to welcome us. This has shown to us the level of concern they have towards us while we were in the wilderness.

“My decision to go back to the school is in the hands of my parents, as well as the level of concern the government might show towards the security of the school, ” he said.

‘No more boarding school for my son’

Some of the parents of the students lamented that government officials did not allow them to speak with their children, adding that they suffered a lot as they never faced this kind of situation. They vowed not to allow their children go back to that school or any other boarding school.

Mrs Elizabeth Jonathan, mother of an SS2 student, Collins Vincent, said she didn’t sleep throughout the days the children were in captivity.

“I haven’t spoken to him yet, but I have seen him and we waved to each other. I thank God that he came out alive. My child won’t go back to that school, and he won’t attend a boarding school again,’’ she said.

Speaking on the rescue, Governor Bello said one of the students was suffering from excessive exhaustion and was receiving treatment in a hospital. He also noted that their health conditions would be monitored for some days before they reunite with their families.

“They have been through tremendous torture. We will study and review every step involved, with a view to finding a lasting solution to the challenge.

“No ransom was paid to get them back. However, it involved a lot of logistics because we involved many groups. It was a very difficult and demanding task, but at the end, we are happy it yielded results,’’ he said.

Secretary to the State Government, Ahmed Ibrahim Matane, who was part of those who went to the forest to dialogue with the bandits said, “It took a lot of courage to go there. And when we got there, it was a matter of life and death because anything could have happened. But God who knew why we were there protected us.”

He noted that the same method used to secure the release of the NSTA victims also helped to get the students released.

“Many will live to remember this for the rest of their lives. The experience is traumatising. They trekked for eight hours, with limited food. So you can imagine what happened to them,’’ he said.

At least four persons were killed and 11 others, including seven women, were kidnapped in fresh attacks on different villages in Kagara, Niger State.

The armed bandits were said to have first struck at Gidan Adamu, near Yakila, headquarters of Gunna district.

The district head of Yakila, who was kidnapped many weeks ago, has remained in captivity till date.

A source told our correspondent that the bandits attacked another village called Gidan Wamban Karaku and abducted seven women, two of whom are nursing mothers.

They also rustled a large number of cows and headed to Madaka district, where they kidnapped the Imam of Rubo village.

The deceased victims have been buried.

A security source told Daily Trust that in Karako village, many cows were also rustled.

In Angwan Adamu, one person was killed while many were abducted