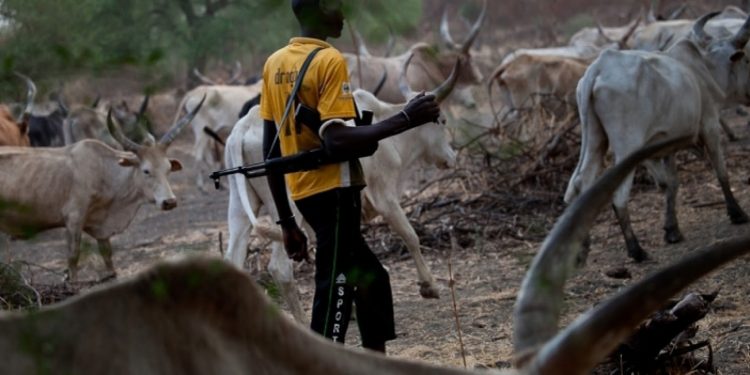 Four men have been hacked to death at Idiyan village in Igangan in Ibarapa North Local Government Area of Oyo State by suspected  Fulani herdsmen in what seemed like a reprisal, in less than 24 hours after a suspected territorial warlord and kidnap kingpin, Iskilu Wakili, was arrested by members  of Oodua Peoples Congress (OPC).

The killing of the four persons was made known by the Aare Ona Kakanfo of Yorubaland, Iba Gani Adams, in a statement made available to journalists by his Special Assistant on Media, Kehinde Aderemi.

According to Adams, the deceased were hacked to death around 2: am on Monday at the village.

Two of the men killed were said to be members of the community police in the area.

Adams, in a statement by his Special Assistant on Media, Kehinde Aderemi, said the four men were killed in the most gruesome manner, adding that the audio and pictorial evidences at his disposal indicated that the killers have been terrorising the village and its environs, engaging in untold kidnapping, killing.

They have also collected over 800 million naira as ransom from their captives.

The statement reads in part:”Wakili men have displaced more than a million residents in the over 10 villages in Oke Ogun.They have raped, and killed residents at will. The late Alhaja Sherifat, and the late Dr. Fatai Aborode  and several others were killed, and they are  still on rampage till today. They have been terrorising our people for more than six years. Wakili was a commedian, pretending to avoid being investigate and prosecute .He was hail and hearty, but started pretending shortly after he was captured.

Adams further alleged that criminal elements in Ibarapa had also collected over N800million as ransom from their captives, saying: “Wakili men have displaced more than a million residents in the over 10 villages in Oke-Ogun. They have raped, and killed residents at will. The late  Sherifat Adisa (a member of Independent Petroleum Marketers of Nigeria, IPMAN), and the late Dr. Fatai Aborode (a mechanized farmer)  and several others were killed, and they are  still on rampage till today.

“They have been terrorising our people for more than six years. Wakili was a comedian, pretending to avoid being investigated. He was hale and hearty, but started pretending shortly after he was captured.

“It is sad that kidnapping and killing still continue unabated without any clue as to the time it will end. Today, four men were hacked to death at Idiyan village, and it is sad and most unfortunately that the  police have not been able to unravel the killers till the present time.”

Adams, expressed worries that the security situation in the South West was becoming too worrisome, maintaining that the situation could have been so worse if not for the efforts of the OPC. He, however, warned criminal herders to stay away from the region, disclosing that OPC and other local security operatives would continue to ensure that the region is safe for residents.

Adams, while reacting to the arrest of four members of the OPC that nabbed the alleged  notorious kidnapper, he said,” it is purely an admittance of failure for the police to arrest our gallant men that had assisted them in nabbing the notorious kidnapper, Wakili and three of his men.

“With the detention of the OPC members, it shows, that the police are ready to frustrate the efforts of the people. The police that are supposed to commend the joint security team for complementing their efforts went ahead to detain them unjustly, alleging arson and killing of an unknown person.

“Up till now, the police have failed to unravel the killers of the four men. People are beginning to lose confidence in the ability of the police. It will be disastrous for the police to lose the respect of the people.

Adams, however, urged the police to release the members, and concentrate on getting rid of the Igangan forests of bandits and kidnappers.

Oyo State  Police Public Relations Officer (PPRO) CSP Mr. Olugbenga Fadeyi,  could not be reached on his mobile phone at the time of filing this report. He did not pick the calls made to his line and he did not respond to a WhatsApp messages to him as well.

The PPRO  had in a statement on Sunday evening ,said that OPC members had,“invaded Kajola community in Ibarapa axis of the State. The invasion was reportedly aimed at arresting one Wakili, a Fulani by tribe, who is alleged to be the sponsor and mastermind of various criminal attacks against the people/farmers of Yoruba origin in the community.”

Fadeyi stated that the state Commissioner of Police, Mrs. Ngozi Onadeko, “quickly moved into action and preliminary findings revealed that some OPC members went to Kajola community in Ibarapa North Local government Area of Oyo State.The house of Wakili  was set ablaze, while a female was burnt in the fire and Wakili , 75 -years- old  blind man  with two other persons were picked up.