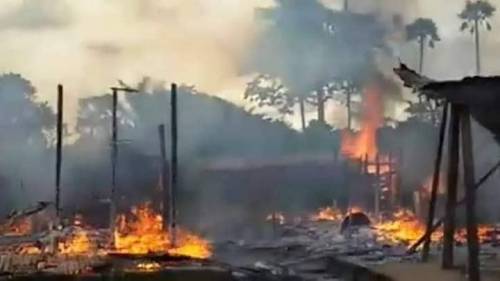 At least 50 unarmed civilians have been allegedly killed by military men in Shangev-Tiev, Konshisha Local Government Area of Benue State following reports that two soldiers were missing in the community, multiple sources told SaharaReporters on Thursday.

SaharaReporters gathered that the soldiers went missing during a routine patrol in the community days after a communal crisis between towns in Konshisha and Oju LGAs.

According to reports, three soldiers were initially missing but one of them was later found.

It was learnt that troops of the Operation Whirl-Stroke (OPWS) on Wednesday and Thursday morning invaded the community.

The operation, which involved deployment of military helicopters using missile launchers, left scores of unarmed civilians dead and property said to worth billions of naira destroyed.

About 200 houses including the palace of Tyoor Unaha Kôkô in Agidi and several cars in village, which is now deserted were set ablaze by the soldiers.

Narrating the dastard act to SaharaReporters, a youth leader said, “We have lost over 50 unarmed civilians, more than five of my family members have been killed by the Nigerian Army. There are no bandits in Shangev-Tiev, a military General in Makurdi is using the Army to support his tribe in an age-long war over boundary demarcation.

“For over 3 days now, unarmed civilians have come under Nigeria military attack non-stop. Fulanis controlling the Armed Forces of Nigeria are assisting their numerous footsoldiers mobilised by Miyetti Allah in terrorising the civilians.

“They keep killing and destroying properties. How can you use fighter jet on harmless and armless citizens while negotiating ransom with bandit and terrorists?

“As we talk now, most residents have deserted their homes and are taking refuge at Tse- Agbaragba.”

Another resident asked the government to redeploy the soldiers ravaging the community to the various highways where the Boko Haram and herdsmen are presently terrorising and killing Nigerians.

He said, “Its quite sad amidst insecurity in other parts of Benue, Konshisha will be targeted by security personnels. My village has been reduced to ashes for no reason. This is not a Boko Haram. There is massive destruction and killing spree going on. The aged, women and children are not left out, among those killed and displaced. What human sense would warrant such attack and destruction?

“For days now, our people have been under flames, displaced and are massacred.“

Another resident said, “My grandfather’s house is in ruins, I hear. 2001, the Army burnt my fathers village and murdered my people. 20 years later, the Army is burning down my mothers home. 20 years after Zaki Biam, the Army has returned to Benue in the same fashion. This is not the way to go.”

Meanwhile, Governor Samuel Ortom has pledged to return peace to Konshisha and Oju while briefing journalists after an expanded Security Council Meeting with stakeholders from the two local government areas.

Ortom, who reiterated the need for Benue people to support security agents deployed to end crisis in their areas, admonished the people against attacks on security agents, which would make the situation extremely difficult to contain.

He explained that as part of measures to nip the land dispute between Konshisha and Oju in the bud, it was agreed that the boundary be demarcated and a day was fixed for the exercise.

According to the governor, a few days to the agreed date, crisis erupted again and security agents were deployed to control its escalation when the troops sent to Konshisha came under attack with two military personnel still missing.

Ortom condemned the practice of some communities engaging militia to fight their neighbours. He, however, vowed that such merchants of violence would be made to face the consequences of their actions