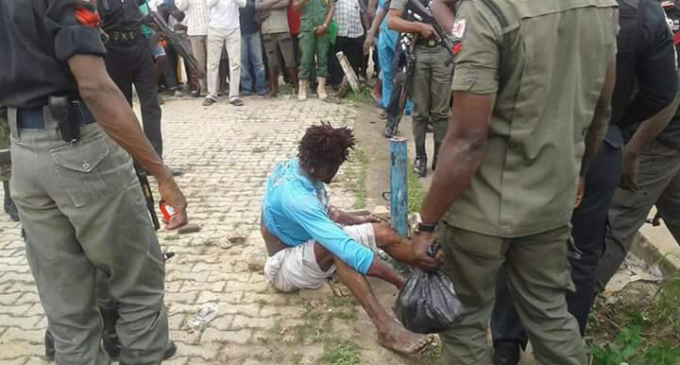 Aside from the arrest and parade of suspected ritualists by the police, the Nigerian social media space has become a place where users mobilise members of the public to help find missing friends, colleagues, and family members.

“Nigerians are reported missing daily. But most often, there are no records of these missing people, it is our mandate to document these records and make it easy to find those who are lost and missing,” an excerpt on the website’s front page says.

In most cases, some of these persons declared missing are found but many remain missing — with the hope of getting found by their families and friends dimming every passing day.

The trend of missing persons and the police’ arrest of suspected ritual killers suggest that many of those declared missing may have been victims of ritual killers.

Although reported cases of ritual killings show that the incident happens in all regions of the country — media reports suggest that the south-west accounts for a large percent of the killings.

TheCable analysed some of the media reports published in the past few years on ritual killings in the south-west region of the country.

On March 24, 2014, the nation was thrown into a moment of confusion when a kidnappers’ den was discovered in Soka community, Ibadan, Oyo state.

The den was discovered by some commercial motorcyclists, popularly known as ”okada”, who were searching for two of their colleagues after they took two passengers to the community without returning.

After the den was busted, human skulls, dried human parts alongside malnourished victims which were reserved for ritual purposes, were discovered.

Personal items like bags, shoes, and identity cards which appeared to be victims’ belongings were also seen at the den.

Since the 2014 shocking discovery at Soka, there have been multiple revelations of suspected ritual killings, especially in the south-west of the country.

On May 6, 2015, the decomposing body of Precious Kessington Omorodion, a 23-year-old, was recovered in a  kidnappers’ den at Ota, Ogun state after 18 days of disappearance.

The police also rescued a 28-year-old woman found in the uncompleted building.

In 2016, the Ogun police discovered a ritualists’ den located within an abandoned filling station at Iyana-Ilogbo axis of Sango-Ota of Ogun state, following a tip-off from a member of the community.

The police arrested two suspected ritualists in connection with the activities carried out in the den.

On August 30, 2017, two people were killed by a mob in the Mushin area of Lagos state over alleged involvement in kidnappings and ritual killings.

The incident was said to have happened at Challenge bus stop, Mushin, after a vulcaniser sighted a suspected mad man discussing with someone in a tunnel at the bus stop.

On October 7, 2017, the Ogun police arrested six members of a syndicate allegedly involved in killing people for ritual purposes at different locations across the state.

The police said two members of the syndicate were caught with a bag containing fresh and dried human parts.

It was reported that the assailant attacked his mother by hitting a plank on her head at their residence at Raji Ajanaku street, Alaja road, Ayobo axis of Lagos after he had sent his nephew to go and buy a white handkerchief and a pack of cigarette.

On November 27, 2018, two brothers identified as Saheed Obadimeji and Ayodeji Obadimeji were said to have beheaded a teenage boy at an uncompleted building in Sapati town, Ibeju-Lekki, Lagos.

It was reported that the suspects cut off the boy’s head for the purpose of selling it for N200,000.

The suspects have been remanded in prison.

On January 18, 2019, the Ekiti police busted a ritualists’ den in Odo, Ado Ekiti, and arrested two suspected ritualists, after a tip-off from members of the community on suspicion of ritual activities in the area.

On June 20, 2019, Dotun Ogunlade, a prophet popularly called ‘Arole Jesu’, was arrested in Igboora area of Oyo state for the alleged murder of Bosede Ogunlade, a 25-year-old housewife for ritual purposes.

The prophet was said to have lured Bosede, who hailed from Ilorin in Kwara state, with the promise of providing solution to her economic and marital problems.

The two suspects were said to have been sighted at a cemetery, digging the grave of the mother of one Amoo Bankole.

In June 2020, residents of Akinyele LGA in Oyo state were thrown into panic over the series of rape and murders that occurred in the area.

Within one month, three young ladies — Grace Oshiagwu, Barakat Bello, and Azeezat Somuyiwa — were murdered in their residences located in Akinyele LGA in a pattern that suggested ritual killing.

On the Akinyele killings, the police arrested one Sunday Shodipe, a 19-year-old suspect, who confessed that he received food and N500 for each of the six persons murdered in the area.

He said he was sent on the mission by a 50-year-old herbalist, whom he claimed was his master.

“Anytime I’m to go for the killing, baba (referring to the herbalist) will give me some charms and also teach me some incantation to be recited so that nobody will see me at the scene of the crime,” he said.

On August 14, 2020,  the Ondo police arrested one Festus Adebayo, a 65-year-old pastor alongside Gbemisola Olufusi for alleged involvement in ritual activities.

The duo was accused of using the menstrual pad of one Oluwasemilore Iluyomade, a 20-year-old girlfriend of Olufusi for ritual purposes.

On 29 October 2020, Rotimi Olukoju, a guard with a microfinance bank was reportedly killed by suspected ritualists and his head cut off at Okia area of Oka-Akoko, Ondo state.

The deceased met the suspected ritualists on his way to the farm.

The suspects were arrested after a phone belonging to a missing person was tracked to one of the suspects. Corpses were also discovered in the suspects’ house — a development that made angry youths in the area raze the building.

On January 17, 2021, an elderly man, who according to residents, usually acts like a mentally unstable person, was arrested by the police for alleged kidnapping and ritual activities in Ado-Ekiti, Ekiti state.

The police discovered some items belonging to his victims like cheque books, wigs, and ATM cards in an abandoned uncompleted building adjacent to the Ekiti State Teaching Hospital, where the suspect lived.

On April 12, 2021, a woman — identified as Iya Elekuru — was murdered in a building by suspected ritualists in Ile-Ife, Osun state. Her killers were said to have lured her into the building under the pretence they went to buy food from her.

When her corpse was discovered, the head and hands had been cut off.

Every Nigerian citizen is entitled to the right to life as enshrined in section 33 of the 1999 constitution (as amended).  The right to life can only be denied if such a person is sentenced by the court when found guilty of a criminal offence.

Those who engage in ritual killings risk heavy punishment when convicted by the court as states have legal provisions to punish ritual killers and kidnappers.