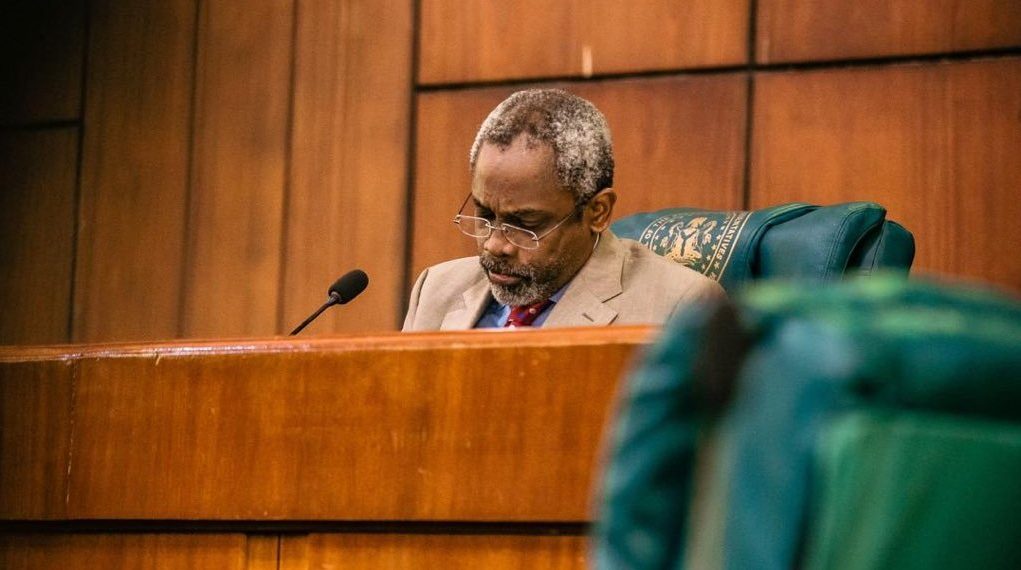 A member of the House of Representatives, Mark Gbillah (PDP, Benue), has said he will try to halt Tuesday’s legislative proceeding if an attempt is made by the leadership of the House to stop members from discussing the ‘illegal Twitter ban.’

Mr Gbillah, who represents Gwer East/Gwer West federal constituency of Benue State, while speaking with PREMIUM TIMES on Saturday, urged his colleagues in the National Assembly to abandon party loyalty and address the breach of Sections 35 and 39 of the Nigerian Constitution on the rights of Nigerians to free speech and freedom of expression.

The lawmaker said President Muhamadu Buhari would have faced an impeachment process if he had been the president of a more democratic country.

He said the ban is a confirmation that Mr Buhari’s administration has not been ruling according to the principles of the Constitution.

There have been instances where the House leadership has used technicalities to prevent the opposition from raising critical issues that concern the actions of the executive arm of government.

Mr Gbillah was once prevented by the Deputy Speaker, Idris Wase (APC, Plateau), from submitting a petition from the Mutual Union of Tivs in America (MUTA) on the killings in Benue. Mr Wase, who presided over the House sitting on that day, ruled that Nigerians living abroad had no right to submit a petition to the House even through a lawmaker.

It took protest by Nigerians in the Diaspora for the leadership of the House to allow Mr Gbillah to submit the petition.

Also, during the heat of the controversy surrounding the Minister of Communications and Digital Economy, Ali Pantami, a point of privilege was raised by minority leader Ndudi Elumelu.

The matter was not allowed to be debated by the Speaker, Femi Gbajabiamia, who argued that Mr Elumelu raised the issue under the wrong protocol.

Also, during the ENDSARS protest, there was an altercation between the deputy speaker and Shina Peller (APC, Oyo), after the former, who presided over the plenary session, refused to allow Mr Peller the opportunity to raise a point of order.

PREMIUM TIMES reported the ban of the microblogging site, Twitter, by the federal government.

This came two days after Twitter took down a controversial tweet by President Muhammadu Buhari which the microblogging site said violated its rules. Many Nigerians had described the tweet as a veiled threat of violence against the Igbo ethnic group while others disagreed saying it was targeted at perpetrators of violence.

Despite the ban, Nigerians have continued to access Twitter, through Virtual Private Network (VPN). However, the Attorney General of the Federation, Abubakar Malami, announced that his ministry will prosecute Nigerians bypassing the restriction.

Mr Malami, in a statement on Saturday, directed the Director of Public Prosecution to liaise with the Nigerian Communications Commission (NCC) to prosecute Nigerians violating the ban.

So far, the leadership of the House and the Senate have not commented on the Twitter ban.

On Saturday, the European Union, alongside the United States, the United Kingdom, Canada and the Republic of Ireland, issued a joint statement, expressing their opposition to the ban.

The House of Representatives is due to resume plenary on Tuesday, following a two weeks break for the zonal public hearing on the constitution review exercise.

Speaking on his planned action, Mr Gbillah said, “I will speak for myself, we will have to ensure that the proceedings of the House for that day are jettisoned if that kind of attempt is brought up again, either by the speaker or the deputy speaker.

“If our privilege is breached, which is enshrined in our laws, we will no longer lay low. If that is done, we will have to interrupt the proceedings of the House for the whole world to see that our hallowed chamber has become a partisan chamber, instead of the representative assembly that Nigerians expect.

“These are the actions I am willing to take, I am imploring my colleagues to tow the same line. The opposition will have to take a stand to ensure that the proceedings of the House do not go on if this issue is not tackled.”

Mr Gbilla said he would discourage his colleagues in the minority party from walking out of the House sitting if the matter is not allowed to be discussed.

“Staging a walkout, in my own opinion, is not enough. We have had a situation where hoodlums, led by the now deputy (senate) president (Ovie Omo-agege), came and removed the mace in the upper legislative chamber. Yet there is no consequence for this erosion of our democratic institution. It is time to rise to our responsibilities as those who represent the people.

“The president has failed to make comments on killer herdsmen, aside from periodic statements by Garba Shehu, where he goes about insulting people, including my governor, Samuel Ortom. I am not sure that Mr President has made any comment about 100 people killed along the Benue/Ebonyi border.”

The lawmaker also challenged Mr Malami to tell Nigerians which law he plans to use to prosecute people still using Twitter despite the ban.

According to Mr Gbillah, the attorney-general has not been giving President Buhari the right advice.

“I want to ask him, prosecution under what law. He should tell Nigerian s under what law they will be prosecuted. To be prosecuted by fiat of the executive. An unconstitutional fiat. This is how the attorney-general keeps displaying questionable conduct as a Senior Advocate of Nigeria.

“He should show us what law he is banking on to prosecute Nigerians who are within their rights. The president is not being advised properly by the attorney-general,” he said.

Aside from the press statement by the minority caucus of the House, most lawmakers in the National Assembly are trying to avoid making public comments on the ban.

Two other lawmakers who spoke with PREMIUM TIMES asked not to be named despite being members of the opposition party, PDP. While they both condemned the action of the government, they were not willing to make their stance public.

“When the house crumbles, everything goes with it. Our country is crumbling so anything goes. No civility, No dignity. We have a president and a presidency. We don’t know who is in charge. It’s the beginning of totalitarianism in Nigeria and a ploy to take away our right to speak freely.

“The minority caucus has issued a statement condemning the ban. And we’ll take it farther. But understand that this president has a penchant for disobeying the parliament.

“It is a fact that some legislators are still slave to political parties and give allegiance to party instead of the Constitution and the nation,” one opposition lawmaker said.

Another PDP lawmaker from the South-west said the government has no justification for the ban.

“I am totally against this Twitter ban by President Buhari. There is no valid reason to do it. It encroaches on the right to free speech and casts Nigeria in a very bad light,” he said.

None of the lawmakers spoken to expressed commitment to openly join Mr Gbillah in any protest.