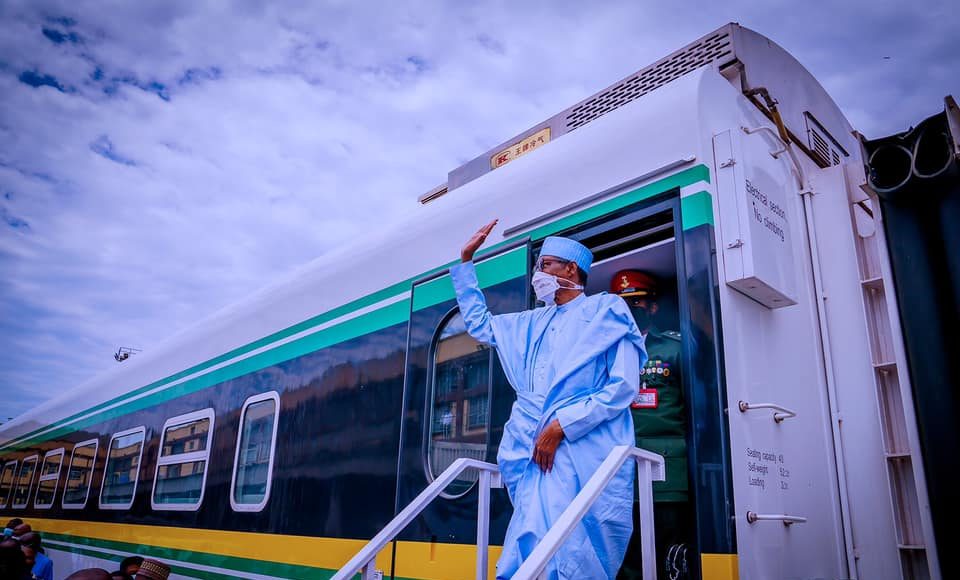 The President, Major General Muhammadu Buhari (retd.), said on Thursday that the construction of a rail line that will link Nigeria to Niger Republic will position Nigerian ports as the choice for import and export business from the neighbouring country.

Buhari said this at the inauguration of the commercial operations of Lagos-Ibadan railway project at the Mobolaji Johnson Railway Station, Ebute Metta, in Lagos. The 157-kilometre standard gauge railway line, which runs from Apapa, Lagos to Ibadan, Oyo State, cost over $1.5bn.

He described the project as another milestone in the drive of his regime to revitalise the railway system and establish it as a choice mode of transportation for both passengers and freight.

Buhari said, “This vital line establishes an end-to-end logistic supply chain in railway transport within its short corridor, Lagos-Ibadan, as goods to the hinterland would now be transported by rail directly from the Apapa port Quayside straight to the Inland Container Depot located in Ibadan from where it can be distributed to other parts of the country.

“In clear recognition of the challenges posed to our economic growth by the absence of strong and effective infrastructure, we have in the rail sector, further to other ongoing railway infrastructure projects, embarked on the completion of the outstanding segment of the Lagos-Kano railway, which is Ibadan-Kano.”

Buhari said the Lagos-Kano railway project, when completed, would link the Kano-Maradi line at Kano, adding that a rail link from the Nigeria southern ports of Lagos to Maradi in the Niger Republic would be achieved.

“The connection through rail would position Nigerian ports as the choice for import and export business of the people of landlocked Niger Republic. This would be beneficial to the economy through employment from new business opportunities and wealth creation,” he said.

The Minister of Transportation, Rotimi Amaechi, said at the event that the Federal Government demolished 1,000 houses in Abeokuta, Ogun State and various structures in Lagos and Oyo states during the construction of the project.

Amaechi said his ministry had a running battle with the former governor of Ogun State, Senator Ibikunle Amosun, on plans to demolish 1,000 buildings.

“But when he faced the reality of the fact that 1,000 houses must be demolished, he had no choice but to allow us demolish the 1,000 buildings. So, we demolished 1,000 houses in Abeokuta to be able to build that station. So, we wish to thank the former governor who is now a senator.”

Amaechi also said the current governors of Lagos, Ogun and Oyo, as well as the former helmsmen of the three states, supported the Federal Government during the project construction stages despite the many challenges encountered.

“It is because the President is focused on transportation and funded it, that is why we are here gathering for the inauguration of this facility,” he added.

The Minister for Works and Infrastructure, Babatunde Fashola, said the project would create more economic benefits to the people of Lagos.

“I think, for us, it is a major achievement, and we should continue on this kind of track in order to improve our infrastructural deficit in this country,” he said.

The Minister of Transportation, Rotimi Amaechi, lauded the Chinese government for granting the loan needed to finance the rail project.

“We are grateful that the Chinese government through the China Exim bank was able to give us the loan at a concessionary rate to construct from the seaport down to Ibadan.

“We hope that we get money to construct from Ibadan to Kano so that we can complete the tracks and make sure that business takes place,” Amaechi said.

The minister described the Integrated National Security and Waterways Protection Infrastructure, called the Deep Blue Project, which was also launched by Buhari, as a dream come true.

He said, “When we took over office, we were number three in the world on maritime insecurity. Now, we are number one. But we will soon exit this.

“In fact, it became worse that we moved from number one to the point that insurance companies tag ships coming to Nigeria as if they were coming to a war zone.”