The price of Bitcoin has hit $50,000 for the first time in history.

The cryptocurrency has been in the spotlight recently; receiving endorsements from Elon Musk, Tesla CEO, and Mastercard.

Bitcoin, the world’s largest cryptocurrency, garnered renewed interest in January when Musk began to tweet and about his investment and updated his Twitter bio with “#bitcoin”.

Following in the footsteps of its CEO, Telsa announced that it had updated its investment policy to get “more flexibility to further diversify and maximize returns” to allow it to invest cash reserve in “alternative reserve assets including digital assets”. 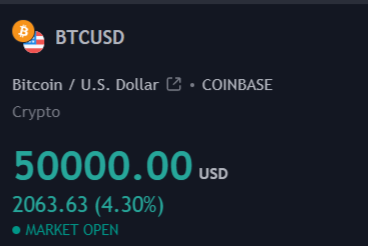 The company also said it expects to begin accepting bitcoin as a form of payment for its products in the near future subject to applicable laws.

Tesla said it would hold $1.5 billion of the cryptos on its balance sheet.

The Bank of New York Mellon Corp., an American investment banking services holding company, also announced that it will hold, transfer and issue Bitcoin and other cryptocurrencies for institutional customers.

In a blog post by Raj Dhamodharan, Mastercard’s executive vice president for digital assets, blockchain products and partnerships, the company said it is preparing for the future of crypto and payments.

The Central Bank of Nigeria recently directed banks and other financial institution to close accounts of persons or entities involved in cryptocurrency transactions.

The CBN argues that cryptocurrencies pose the risk of loss of investments, money laundering, terrorism financing, illicit fund flows and other criminal activities.