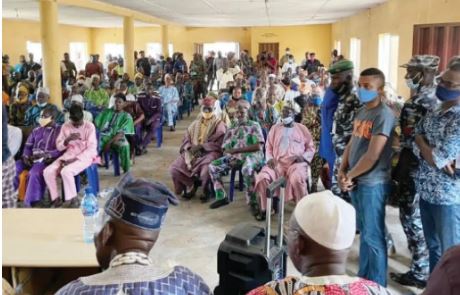 Some of the northerners who left the crisis-prone areas between Friday and Saturday said they paid security operatives between N5,000 and N10,000 to escort them to safer locations, including the residence of Sarkin Sasa, Alhaji Haruna Maiyasin.

One of the victims said they had to pay the money so that they would not be lynched.

“Some of us received monetary donations from our fellow Hausa community leaders to go back to our respective states in the North,” one of the displaced persons said.

He said they lost their belongings during Friday’s crisis, “and that is why we are going back to the North. We are lucky to be alive”,

Recall that a fight that ensued between the Hausa community and the native Yoruba community in Shasa Market, which started on Thursday, February 11, and snowballed on Friday, February 12, had led to the death of nearly 30 people.

The Sasha Market, with shops belonging to the Hausa and Yoruba, vehicles and many residential houses were burnt during the crisis.

Even though peace has reportedly been restored in Shasa and environs following the deployment of security agents, leaders of the Hausa community and some displaced residents said many of them, including women and children, had started moving back to the North.

Some of the victims said they had to leave Ibadan for the North because they lost all their belongings, including shops and houses, and there was no support from the government at the state and federal levels.

Daily Trust learnt that besides many of the northerners that left for Kano, Sokoto, Kebbi, Kaduna, Jigawa and other states, about 500 are currently taking refuge at Akinyele’s Main Garage.

The head of the garage, Alhaji Yaro Abubakar, told our reporter that the youths have been there since Friday and most of them trekked from Shasa Market and adjoining quarters.

A wealthy individual, one Alhaji Nasiru Muhammad Naharande (Youth Leader of the Hausa community in Ibadan), is providing three square meals to the victims at the garage.

Other well-to-do individuals were also assisting the displaced.

Most of the IDPs interviewed vowed not to return to the Shasa Market until the government took decisive measures to protect their lives and property.

The Magajin Garin Hausawa of Ibadan Land, Alhaji Usman Garba, confirmed on Monday that some members of the Hausa Community were going back to the North in droves.

According to him, “We have not seen any government intervention agency or NGO attending to our humanitarian needs.

“Our people are joining trailers and buses back to the North. They are returning to the North not because they were asked to go but because many of them have lost their belongings in the crisis.”

Asked about the security situation in Shasa, he said, “Our people are impressed because the police, DSS, Army, Civil Defence and men of Amotekun are here.  They check people moving in and out of Shasa.”

On how they were managing the displaced in terms of feeding and other basic needs, Alhaji Garba said, “We have moved some of them to main Sabo in Mokola to reduce burden on the house of Sarkin Sasa.

“We are also contributing money to feed and care for the victims.

“I wept when I went to Shasa. Many people were killed unreported. Our children have no place to sleep while others are hungry. Since that day, we have been contributing money for them to eat.

“I just called my younger brothers to bring the only remaining bag of rice in our house for those who are still in the house of Sarkin Hausawa.

“Government has not done anything in terms of humanitarian support,” he said.

Daily Trust had on Monday reported that about 5,000 Hausa residents in Shasa were seeking refuge at the palace of Maiyasin.

“I am at the Baale Shasa’s house as we speak. We have spent more than two hours here. The governor on Sunday directed the Sarkin Hausawa and the Baale of Yoruba to find a lasting solution to the crisis,” he said.

The Magajin Gari, who is a member of the committee set up to resolve the crisis, said there were immediate and remote causes of the crisis.

He said that they discovered the mastermind of the crisis in the area was from the Niger Republic. According to him, the immediate cause was the fight between a Nigerien and a lady in the market while the remote cause was the leadership tussle at the Shasa Market.

He said a comprehensive report on the findings of the committee, which was set up by Oyo State Governor, Seyi Makinde, will be released after they completed their deliberations.

“The meeting will continue today,” the leader said.

On the remote cause of the problem, he said, “Traders in the market have been having issues for long. The Yoruba people are arguing that since the establishment of the market, it was only Hausa people that have been leading the market. They are insisting that they won’t accept any truce until a Yoruba man emerges as the chairman.

“Although our people said the market should be led by a Hausa man because they are the real people working in the market, we will continue the meeting tomorrow (today),” he said.

Meanwhile, Governor Makinde has said that a judicial panel will be inaugurated to investigate the crisis, adding that peace and security committees will equally be put in place in all the zones of the state to address the grievances of contending parties.

Makinde, in a state-wide broadcast, aired on the Broadcasting Corporation of Oyo State (BCOS), on Monday, appealed to angry residents of Shasa to sheath their swords.

He said contrary to news circulating on social media, the state government was able to bring the situation in Shasa under control since around 2 pm on Saturday.

“A curfew was put in place and there has been no further unrest since then. I mourn the loss of lives that has occurred. Even when justice is served, nothing can bring back the dead. That is why I must also state that individuals who have taken to stoking up ethnic flames in Oyo State either through their utterances or actions or posts on social media are enemies of our state.

“The people who have decided to leverage these sad events to further their political goals are not our friends. These people handing us petrol and matches will not stand with us when the fire turns into an inferno.  When we see the potential dangers of words and actions, we must take precautions. It is time to think about our self-preservation. It is time to put Oyo State first,” he said.

The Inspector-General of Police, Mohammed Adamu (Rtd), on Monday, ordered the immediate deployment of four units of riot policemen to tame growing violence in Ibadan, Oyo State capital and other parts of the state.

This was contained in a statement by Force spokesman, Frank Mba.

He said the operatives, to be led by DIG David Folawiyo, would reclaim the public space, reinforce security and bolster public confidence in the areas affected by the crisis.

“The deployments, consisting largely of intelligence and operational assets of the Force, include four units of the Police Mobile Force, seasoned operatives from the Force Intelligence Bureau and one operational/surveillance police helicopter from the police air – wing department.”

Mba added that the IGP assured that the Force was committed to the safety of lives and property of the citizens in the country.”

The governors who arrived by 7.03 pm were subsequently led into a closed-door meeting by the host governor. The northern governors were reportedly directed by their colleagues who were meeting in Kaduna to proceed to Oyo.

Credible sources said the governors were also billed to meet with various stakeholders involved in the crisis on Tuesday, to arrive at an amicable resolution.

Others present at the meeting were the Special Adviser to the governor on Security, Mr Fatai Owoseni; Special Assistant to the governor on Community Relations (Arewa Community), Alhaji Ahmad Murtala; and a representation of the Hausa communities among other stakeholders.

The governors are expected to proceed to Ogun State on Tuesday.