Home News I’ll bring you back to the fold, Gov Akeredolu tells Obaseki at... 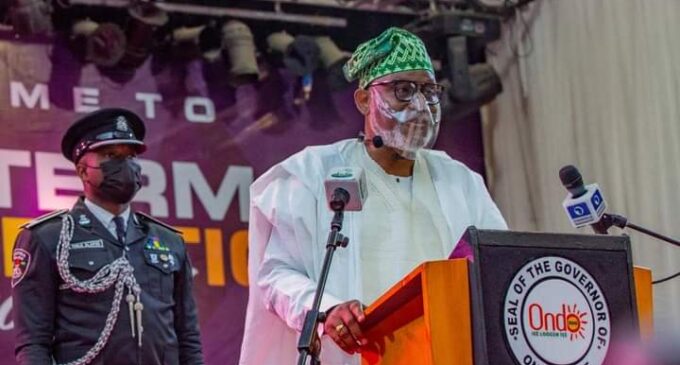 Rotimi Akeredolu, governor of Ondo, says he will bring back Godwin Obaseki, his Edo counterpart, to the “fold”.

Akeredolu stated this on Wednesday during the swearing-in ceremony for his second term in office.

Obaseki had defected to the Peoples Democratic Party (PDP) in the build-up to the 2020 Edo governorship election, after he was disqualified from contesting on the platform of the All Progressives Congress (APC).

The Edo governor secured the ticket of the PDP, and went on to win the governorship election for his second term in office.

Akeredolu, while acknowledging the presence of governors and other party stakeholders at his inauguration, said he heard Obaseki had returned to the “fold”.

“They said you have returned to the fold, and we are happy to have you,” Akeredolu jokingly said, in what appeared to be a reference to Obaseki’s possible return to the APC.

Obaseki, who was surrounded by some governors, immediately made a no-no gesture in response to Akeredolu’s comment.

Afterwards, the Ondo governor continued: “If they cannot bring you, I will bring you back.”

Akeredolu went on to describe Obaseki as a “brother, neighbour, friend and co-traveller”,  while appreciating the governor for attending the inauguration.

The event was also attended by Adegboyega Oyetola, Babajide Sanwo-Olu, Dapo Abiodun, and Kayode Fayemi, governors of Osun, Lagos, Ogun and Ekiti, respectively; Bola Tinubu, national leader of the APC, as well as other party chieftains.