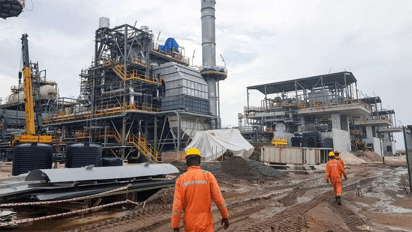 THE Federal Government has concluded plans to sell crude oil to the $15 billion Dangote Refinery in Naira.

This is part of measures adopted to strengthen the currency and by extension the nation’s economy.

The governor, Central Bank of Nigeria, CBN, Mr. Godwin Emefiele, who visited, Saturday, to inspect the ongoing construction of the Dangote Refinery, Petrochemicals Complex Fertiliser Plant, and Subsea Gas Pipeline project at Ibeju Lekki, Lagos, said: “We have taken the decision to sell the crude to the Refinery in Naira because we want to impact the economy.

“We also hope that by the time the Refinery start to refine, and sell its petroleum products in Naira, the local currency will be stronger, and by extension the nation’s economy, which is still oil-driven.”

According to him, this is expected to help Nigeria save about 41% of its foreign exchange that is being expended on the importation of refined petroleum products.

Emefiele, who noted that the first shipment of Urea from the Dangote Fertiliser Plant would begin in March 2021, said: ”Based on agreement and discussions with the Nigerian National Petroleum Corporation and the oil companies, the Dangote Refinery can buy its crude in naira, refine it, and produce it for Nigerians’ use in naira.

“This will increase our volume in naira and help to push it into the Economic Community of West African States as a currency.”

Expressing confidence that the refinery would be completed by the first quarter of 2022, Emefiele, said: “I am saying that by this time next year, our cost of import of petroleum products for petrochemicals or fertilizer will be able to save that which will save Nigeria’s reserve. It will help us so that we can begin to focus on more important items that we cannot produce in Nigeria today.’’

Emefiele said the CBN had given an N100 billion intervention to the projects, adding that the apex bank was ready to support Nigerian businesses set up to uplift the country economically.

Also speaking the Alhaji Aliko Dangote said that the fertilizer and petrochemicals plants were capable of generating $2.5 billion annually while the refinery would serve Nigeria and other countries across the world.

Aliko Dangote, who expressed gratitude to President Muhammadu Buhari and the CBN Governor for their support toward the completion of the projects, said they would create additional jobs for Nigerians.