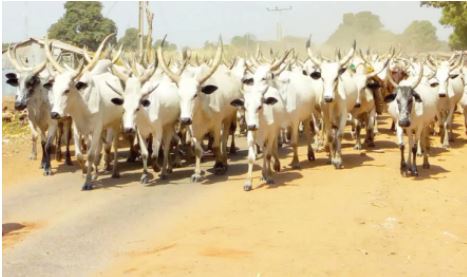 At least four Fulani herders were shot dead in an attack on a settlement in Ogborji, Orumba South Local Government Area of Anambra State.

According to Alhaji Gidado Siddiki, Chairman of the Miyetti Allah Cattle Breeders Association of Nigeria (MACBAN), South-East Zone, many cows were stolen in the attack which happened on Saturday.

Siddiki said over 20 Fulani herdsmen have been killed in Anambra alone from January to March, 2021.

He disclosed this in Awka, Anambra State capital, while briefing  some  journalists on the  incessant attacks  and killings of MACBAN members in the state and southeast zone in general.

Siddiki, who was visibly pained, said the latest attack on his people took place at Mohammed Idris Herders’ Settlement on Saturday.

He said he was told that gunmen entered the camp and started shooting and in the process four Fulanis were killed, while their corpses were taken away, adding that hundreds of cows were missing in the attack.

“One of the escaped herders called me and told me that some unknown gunmen in a Hilux vehicle with red cap invaded Mohammed Idris Herders’ Settlement shooting sporadically and that led to the deaths of our four members and hundreds of Cows missing,” he said.

He added that out of the four dead, police have recovered one corpse while three other corpses are yet to be  accounted for.

According to him, they have found where five cows were slaughtered in the area.

He said with the recent killing of  the four herders, the total number of Fulanis killed between January and early March 2021 in Anambra State alone is above 21.

He gave the names of the recent the victims as; Hadari Umaru, Hamidu Umaru, Aliu Idris and Hassan Idris.

He also disclosed that two herders were also killed in a similar manner in Ishiagu, Ivo Local Government Area of Ebonyi State, last week, while many have been killed this year alone.

According to him, the Fulanis in zone are not attacking the host people and are not carrying AK47 because they have  warned them against such.

He stated, “The Fulani people in the South-East are not violent and we are not here to undermine the business of the people of the area. So, I am surprised why my people have been killed unjustly like that.

“We have experienced a lot of challenges in the region including the death of our members, despite our quick response whenever issue of compensation arises. I am constrained to say this publicly, because I can no longer hold the pains anymore.

“My people have begin to think I have been compromised… while keeping wait over various killing of herders in the zone. They have accused me of not saying anything about their killing in the zone.

“My worries now is that time will come when they cannot listen to me again, then it would be very difficult to control and manage them. There is no issue of farmland damaged by our people that we did not pay,” Sidikki lamented .

He called on the Anambra State Government to take action to stop further attack and killing of herders in the state.

Meanwhile, all calls and text messages put to the spokesman of Anambra State Police  Command, CSP Haruna Mohammed,  to react on the incident were not responded to.