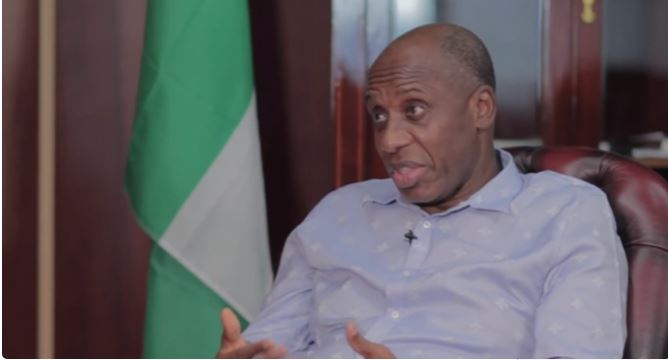 Rotimi Amaechi, minister of transportation, says the “selfishness” of some lawmakers, which resulted in a probe and generated publicity on the details of a 2018 Chinese loan agreement, has negatively affected the country.

In July 2020, a house of representatives panel had raised the alarm over clauses conceding Nigeria’s sovereignty to China in a loan agreement.

The probe dragged on for weeks, despite assurances from Abubakar Malami, attorney-general of the federation, that the federal government will work in the best interest of Nigerians, while Amaechi had also warned that the investigation may affect Nigeria’s chances when it comes to loans.

Giving an update on the situation on Monday when he featured on a Channels Television programme, Amaechi said the probe resulted in seven months of “waste”, as the approval process was delayed.

“That’s where we are. The loan for Ibadan to Kano, up till now we haven’t gotten approval. And at the point that happened, we were just on the verge of getting approval. They withdrew. They’re asking more questions,” the minister said.

“The two things I said at that meeting; they’re happening now. There are other countries we have loan agreements with, that we entered into an agreement to borrow money from. They don’t usually ask for an immunity clause, because they trust you, so they expect that you’ll payback. The moment you brought this to the public, it was ‘ah! you’re giving China immunity clause, so you must give us.’

“The selfishness of those members, who I don’t know what they’re pursuing, has put the country into jeopardy. Now, other countries are asking for an immunity clause in their own agreements.

“The other aspect I said was that the Chinese may likely withdraw. That’s where we are; we’re talking to them. They’ve promised to give us the loan, but at least it’s held us back since June till now. We’ve done seven months. If they had give us money since June, we’ll have gone far. We would have started clearing by now. But imagine seven months wasted because one or some few members of the house of reps went to the public.”

Amaechi also gave a brief explanation of what was covered in the immunity clause regarding the China loan agreement.

“I’ve explained over and over that what the immunity clause simply does is to say ‘look, in case you’re not able to pay back, I want to be given the opportunity to take you to court or to arbitration as it is in the clause’,” he said.