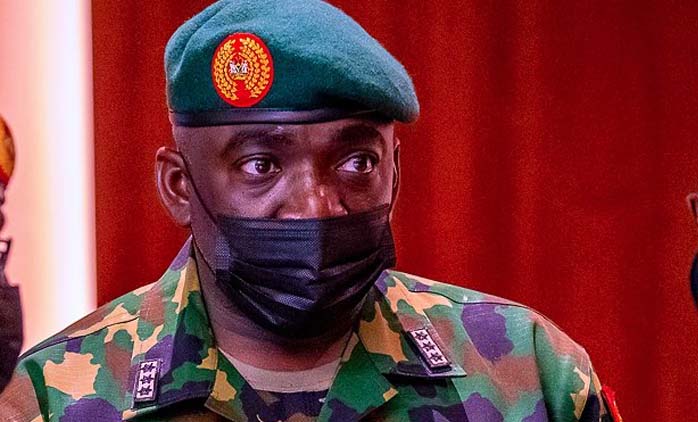 There was panic among residents of the Essien Udim Local Government Area of Akwa Ibom State on Tuesday as the military bombarded the Ikot Akpan forest in the area.

The PUNCH learnt that the military operation was aimed at flushing out hoodlums who had been attacking police formations in the state.

Residents, who share boundaries with hoodlums’ hideouts, told one of our correspondents that the bombing of the forest started at 8am and ended at 12 noon on Tuesday.

The military exercise came barely 24 hours after gunmen attacked the Imo State police command headquarters and the Nigerian Correctional Service in Owerri, the state capital, where 1,844 inmates were freed.

The President, Major General Muhammadu Buhari (retd.), in a statement by his Senior Special Assistant on Media and Publicity, Garba Shehu, on Monday ordered security agencies to fully mobilise and go after gunmen that had been attacking security agencies.

It was gathered that before the military exercise in Akwa State on Tuesday,   residents had been asked to steer clear of the Ikot Akpan forest suspected to be a camp of gunmen.

Residents said the operation began with the deployment of helicopters and drones for aerial surveillance and bombing before ground troops moved in to flush out criminal elements.

The Essien Udim LGA, where the Minister of Niger Delta, Senator Godswill Akpabio,  hails from,  has been under attacks by gunmen,  who have been killing cops and destroying their facilities.

Recall that hoodlums, whom many suspected to be members of a cult group in February, this year attacked the police at the Ikpe Annang junction, where a police inspector was set ablaze inside a police van.

Also in February, they attacked Ikot Afanga community and killed an inspector of police identified as Aniekan, while a divisional police station in the LGA was set ablaze by the hoodlums. They also burnt police vehicles.

On  March 31, 2021, three police officers, including a chief superintendent of police, Ben Ajide, were killed and four others declared missing in a failed reprisal carried out by the police against the hoodlums.

On Tuesday morning, residents, who had not fled the area stayed indoors as the military bombarded the hideouts of the criminals.

A resident of the Essien Udim LGA, Essien Sunday,  who confirmed the bombardment in an interview with one of  our correspondents, described the exercise as a fearful experience.

It was a fearful experience, I told my children and wife to stay indoors – Resident

He stated, “We were woken up this morning by sounds of gunshots and military helicopters hovering around the entire village with fearful sounds. Although we heard the information, nobody knew it was going to be that fearful. So, I  instructed my wife and children to remain indoors throughout the exercise.

“I don’t know how many people were arrested by the army but what I know is that they carried out an aerial surveillance of  communities in the LGA.”

He said “Well, the bombardment started in the early hours of today. I learnt they (the military) sent advance notification that the civilians should vacate the said areas before moving in this morning. So, the aerial bombardment and the support troops, moved in this morning around 8am or so. Most students from the polytechnic could hear the fighter jets and the gunshots. So, that is just It.

“It was an offensive to flush out criminals within three major communities in the Essien Udim LGA, the communities are Uwa, Ikot Afanga, Ikot Akpan communities all in the local government area.”

Also, another resident of the community, Godwin Akpan, said although people were afraid during the bombardment, it was a great relief to the communities who had experienced attacks against the police.

“Yes, there had been cases of insecurity of late with the hoodlums targeting police officers and establishments and of course the military had to come in. Advanced notice was sent to the communities to vacate the areas.”

The Defence headquarters did not respond to inquiries on the reported attack on the forest on Tuesday.

But a top military officer, who confided in The PUNCH, said the exercise, was not a bombardment.

He stated,  “It was a joint military operation conducted by the Nigerian Army, Air force and other security agencies to flush out criminals elements in the  Essien Udim Local Government Area of Akwa Ibom, that have been terrorising the state. The operation was successful. For now, no arrest has been made.”

Less than 24 hours after gunmen attacked the Imo State Police Command headquarters and the Nigerian Correctional Service at Owerri, the immediate past Inspector General of Police, Muhammed Adamu, on Tuesday, visited the state.

During the visit, the ex-IG insisted that members of the Indigenous People of Biafra carried out the attacks. He, therefore, vowed that there would be no hiding place for members of the secessionist group.

Recall that IPOB on Monday said it was not involved in the attacks.

Adamu, who urged officers to use their rifles against the IPOB members, said members of the group were among inmates set free on Monday.

The ex-IG “This is an incident meant to discourage and demoralise you. If they had wanted to test your resolve, they wouldn’t have come in an ungodly hour.

“Those who are attacking police officers and other security agents, as well as security facilities, should not think that they will get away with it. Never!.

“I’m here to encourage you that this group of people that take delight in attacking security agents and security facilities, you should deal with them ruthlessly. You should never ever spare them.

“You should use all the force available to you to ensure you incapacitate them; to make sure that you don’t give them space; to make sure that they don’t exist. These are criminals. They’re not covered in anyway by law. The law is against their activities. But you are covered by law.

“You have facilities and weapons at your disposal that you can unleash against these people. So, your strategy should change. Let your strategy be the type that will counter the strategy of those people.

“When criminals strike, it is a concern. This should be a concern of everybody in Imo State. The local authorities within the area where the police headquarters and Correctional Service are sited, should feel concerned that both facilities were attacked. If both facilities were attacked, the people of that area have been attacked. Therefore, they should feel concerned.

“Some of the suspects that were released by the attackers belong to IPOB group. There will be no hiding place for them. They will re-arrested.”

Also, the state Governor,  Hope Uzodimma,  called on the police in the state to defend themselves against IPOB members.

The governor,  who spoke at the state command headquarters when the ex-IG, visited the state, asked the cops to be vigilant

He said, “If you can’t attack them, you can at least use your rifles to defend yourselves. Any attack on police formation is an insult on us as a government. It is also an attack on the integrity of the government. We must take charge, take control and ensure discipline.”

“I have seen the quantum of destruction perpetrated on the security facilities by the hoodlums. Everyone in Imo State is unanimous on condemning this act.”

The Vice President, Yemi Osinbajo, who also visited the state,  described the attacks as cowardly.

The Vice President disclosed that the Federal Government was adopting measures to stop further attacks on security formations in the state.

He said that government would strengthen security at the correctional centres, police formations and the state at large to combat rising security challenges in the country.

The Vice President spoke to journalists after inspecting the level of damage at the correctional service and the police headquarters.

He stated, “This incident is cowardly. Any attack on institutions of law and order was an attack on the well being of the citizens”

Also on Tuesday the Minister of Interior, Rauf Aregbesola,  after inspecting the correctional service attacked by hoodlums, said inmates who escaped would be pardoned if they returned voluntarily.