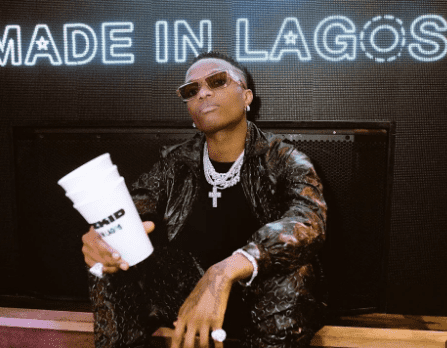 In August 2019, a 23-year-old musician named Stanley Omah Didia moved to Lagos from Port Harcourt after signing a record deal off the back of two singles that had been creating a buzz in the underground circuits for more than 18 months.

Less than two years later, Stanley, now popularly-known as Omah Lay, is one of Nigerian music’s most recognisable faces. His debut project, Get Layd—a 5-track EP that merged the diasporic lingo of Port Harcourt with the iridescent pomp of contemporary Afrobeats—received critical acclaim, achieved commercial success, and found fans in stars like Justin Bieber and Jadon Sancho along the way. Omah Lay’s story mirrors the wide-held axiom that Lagos, which is the economic capital of Nigeria, has turned into a global music destination that lies at the centre of sonic conversation on the African continent and beyond. It’s a point that Omah Lay agrees with. “Lagos provided me the exposure to opportunities that I needed to launch my career,” he says. “It’s an important city in that sense, because it brings you closer to experiences that can shape your relationships and your sound.”

Historically, music has always been an intrinsic part of the fabric of life in Lagos. The 1920s through to the 1940s were dominated by brands of folksy, oral music like juju, apala, and fuji that variated based on the sequence and pulse of the drums that undergirded them. This music, largely sung in Yoruba, grew in defiance of the colonialists’ disdain of local music. In the 1950s and ‘60s, professional recording equipment became available in Nigeria and Lagos’ proximity to the coast meant that professional recording was easily accessible for aspiring artists living in the city. “The availability of recording equipment made it easier for Lagos-based musicians such as I.K. Dairo to record at a high level while the work of other artists in other places still felt primal,” says Segun Akande, Head of Content & Strategy at Mavin Records.

By the time Fela Anikulapo-Kuti’s afrobeat—a fiery distillation of funk, jazz, and traditional instrumentation—became world-famous in the ‘70s, the mythologised aura around Lagos had already been largely formed, giving it a cultural reputation as both the spiritual home of Nigerian pop as well as its operations capital. Over the years, that reputation and Lagos’ financial clout has attracted millions of people to the city, effectively making it a crucible for the Nigerian identity as gleaned from diverse perspectives of these immigrants. “Lagos is a melting pot of cultures, and this is what makes the city so unique,” says Makua Adimora, a writer and editor based in Lagos. “Living here grants you a multi-dimensional experience and as music is informed by a person’s experience, I believe that’s what makes the pop music here so vibrant. Spending even one day in the city, you’d meet people from many different backgrounds and somehow this translates into the music that gets made.”

With the Internet obliterating constraints of time and space, the music being made by this new generation of pop stars—often in celebration of Lagos culture, nightlife and hedonism—has spread across the world.

A direct consequence of the diversity of experiences and people that make up Lagos is the city’s capability to embrace the best of music springing forth from anywhere within the city—or even the country—as it did when 2Baba dropped his debut solo album, Face 2 Face, in 2004, marking a definitive turn in contemporary African music. One year later, pop duo P Square released their critically-acclaimed sophomore LP, Get Squared. Their music, heavily influenced by hip-hop and R&B while spiced up by lyrics inspired by local language and pidgin English, influenced the next generation of pop stars like Wizkid, Burna Boy, Davido and Tiwa Savage.

With the Internet obliterating constraints of time and space, the music being made by this new generation of pop stars—often in celebration of Lagos culture, nightlife and hedonism—has spread across the world. Wizkid’s mid-tempo ode to the hood he grew up in, “Ojuelegba”, catapulted him to international stardom, which resulted in the Skepta and Drake remix that is widely regarded as a sliding door moment for Afrobeats.

“As much as Wizkid speaks on his own experiences on ‘Ojuelegba’, it’s hard for anyone listening not to feel as though the story is theirs because as a dreamer, it most likely is,” Ify Obi, a Lagos-based culture writer and creative director, explains. “That song was a beacon that drew the world to the city of Lagos. As a Lagosian, it really isn’t every day we have the world’s biggest musicians singing about an area in our city, an area they’ve never been to. It was a cultural moment that put the city on the map.”

If the world wasn’t paying attention then, Wizkid’s contribution to “One Dance”, Drake’s chart-topping 2016 single, effectively put a spotlight on Afrobeats and on Lagos. With the genre making a splash on global pop charts, investors and speculators soon found their way to Lagos, hoping to hedge bets on the ascendant sound. Sony Music Entertainment and Universal Music Group had set up offices in Lagos by 2017, in a move widely interpreted as confirmation of Lagos’ position as the epicentre of popular music out of West Africa. In 2020, music streaming service Audiomack set up its first international office in Lagos, putting more boots down in the coastal city.

Olive Uche, Audiomack’s Content Strategy Manager for Africa, says that the move was motivated by the streamer’s view of the vibrant city as a global music outpost. “We’ve been hip to how music was moving, the impact, and the importance of the music making its way from Lagos,” she says. “That played a huge factor in our decision to open our first international here. It was something that we all wanted and knew was needed if we truly cared to move music forward in Africa.”

At the heart of all the success that makes Lagos tick musically is the ever-simmering tension between the city’s hardscrabble mainland and its affluent network of islands that’s colloquially referred to as the Island. As Afrobeats and its offshoots have grown in stature, the power base music in the city has gradually shifted from the mainland to glittering edifices on the Island.

Despite this, the music that powers Lagos, and the wider Afrobeats scene, is heavily influenced by the vibrancy, the language and euphemisms of mainland Lagos, making the mainland to Island trajectory an economic dream for struggling music hopefuls. “The mainland is now the source for what moves culture,” Akande continues. “That’s where all the slang, dances, and cool stuff comes from. Initially, it used to be them wanting to pop on the Island, but now they are more confident in themselves and don’t necessarily look here for validation. They just want to blow up on their own terms and move to the Island for the good life.”