Home News 7 Years After Abduction: We Want To See Our Daughters Before We... 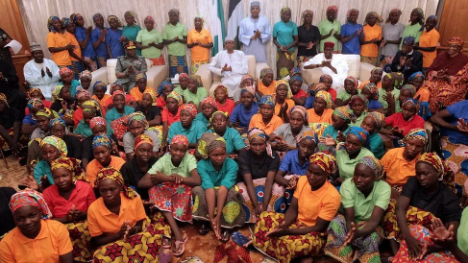 Parents of the yet to be released 112 girls kidnapped from Government Girls Secondary School Chibok in Borno State said they want to see their missing daughters before they die.

Since the abduction of their daughters by the Boko Haram insurgents loyal to Abubakar Shekau, some of the Chibok Parent have died of natural causes and others due to depression.

Those still alive said they were optimistic their daughters were alive and called on the federal government to rescue them.

It is exactly seven years today (Wednesday) when Boko Haram terrorists stormed GGSS Chibok on April 14, 2014, forced 276 girls into a truck and moved towards the Sambisa Forest.

While some of the girls hung unto tree branches on the way to the forest and thereafter found their ways back home, others were not that lucky.

However, after the escape of a few and the release of over 100 through negotiations over time, most of the over 107 of the Chibok girls that have been reunited with their families are still struggling to be on their feet.

Even though a handful of them who were taken to the United States of America (USA) have completed their university education, most of those enrolled in private schools in Nigeria are yet to pass their Senior Secondary School Examination (SSCE).

We want our daughters back – Chibok Parents

By April 14, 2016, two years after the mass abduction, the Chibok Parents Association had already lost 17 members most of who died in circumstances related to depression after waiting without seeing their missing daughters or any tangible news about them.

That was the second anniversary when government officials, parents and activists came together to commemorate the incident in the school where it happened. One of the parents, Bulama Jonah, whose 18-year-old daughter, Amina, was among the abducted Chibok girls prayed to live and see the return of his daughter, lamenting that it was tragic for parents to die without seeing their children.

According to him, 17 parents had died since the incident and many others were sick. He, therefore, appealed to the President Muhammadu Buhari administration to do more in its efforts to defeat Boko Haram and rescue their children.

He added that families were in confusion in the absence of any communication from the government on the whereabouts of the girls. Reading out from his old pocket notebook in which he recorded important dates and events since the abduction, including their visit to President Muhammadu Buhari, Jonah gave the name of 15 out of the 17 deceased parents.

The remaining two died recently and he was yet to ascertain their names.

“If the government had responded in time, our daughters would have been saved. The United States had spotted 80 girls during the last administration, why did the government fail to rescue them. We, therefore, call on the president to step up search for these innocent girls.

“We heard that (former President) Obasanjo, at a point said many of the girls were pregnant and recently, we heard he concluded that the girls were dead and could not be found,” he stated.

Musa, whose daughter was 18-year-old at the time of the abduction said life had never been the same.

“It is always better for children to bury their parents and not the other way round. Sadly, our predicament is worse because we are not even sure if our daughters are alive. Assuming we saw their dead bodies and bury them, we would have carried on with our lives.

“I always dream that my daughter is back and pray the federal government will rescue them before we die,” he said.

In May 2016, a year after President Jonathan’s defeat, President Buhari celebrated the escape of Amina Ali, the first Chibok girl to test the air of freedom from those taken deep into the Sambisa Forest.

Amina and the baby she bore in captivity were the proof of life and source of hope to families in Chibok, Nigerians and millions of sympathisers across the globe.

She came with first hand, credible information about the Chibok girls in captivity thought by many to have died on a suicide mission or sold and ferried across the Sahara.

In November 2016, the second girl, Maryam Ali Mayanga escaped with her Boko Haram husband and their baby boy, Ali, from the heart of Sambisa Forest to a military base in Fulka on the fringes of the forest.

In a major breakthrough in the Chibok hostage crisis, the Buhari administration secured the release of a total of 103 girls in two batches through negotiation mediated by a Maiduguri based lawyer, Zannah Mustapha, the Swiss government and some international organisations. The first batch of 21 girls were released in October 2016 and then 82 more in 2017 reportedly in exchange for five Boko Haram high commanders and a huge sum of money.

The rescue of Rakiya Abubakar who also escaped with her Boko Haram husband in January 2017, and found by Nigerian troops around Alagarno in Borno State, and the subsequent rescue of Salome Pogu, in January 2018, put the number of freed girls at 107. The return of roughly half of their stolen daughters brought joy to their families and hope to families of the remaining 112 girls still in captivity.

Daily Trust reports that anxious families are becoming increasingly disturbed that the promises made by President Buhari to negotiate the release of the remaining girls has not been fulfilled four years after the deal that freed a total of 103 girls.

Freed from bush, trapped in class

The freed Chibok girls have been enrolled in a foundation course at the American University of Nigeria (AUN) Yola to prepare them for onward admission into degree programmes, Daily Trust reports.

The AUN Vice President, University Relations, Dr Abba Tahir, said the foundation course for Chibok girls started when AUN’s founder, former Vice President Atiku Abubakar offered scholarship for 25 girls who escaped on the night of the abduction. He added that upon release of more than 100 girls, the then Minister of Women Affairs, Aishatu Alhassan, asked the university if they could accommodate them on a federal government scholarship.

The AUN management could not however give details about the girls’ progress at the school and instead referred our reporter to the Ministry of Women Affairs, which oversees affairs of Chibok girls for any information concerning the girls.

When Daily Trust contacted the ministry to find out the state of the girls, the information office, Aisha, said she did not have any information on such matter but said the director, child rights, will be able to speak.

Several calls out across to the director were not responded and he did not also respond to the text message sent to him.

In separate interviews, five of the students told Daily Trust that they became frustrated after spending four to five years attending the foundation programme without the prospect of graduating as they did not yet qualify to sit for the SSCE, an exam they were taking when Boko Haram abducted them in 2014.

“We don’t know whether we are in primary or secondary school because it seems the programme has no end in sight,” one of the girls said.

“We had to protest last term before we were allowed to sit for SSCE. Many of us failed but we are taking the exam again this year. Some of us got married last year and more are getting married in December,” she said.

However, another girl said she believed most of the girls were not good enough to make quick progress at the school, saying most of them had to start learning from scratch due to weak academic background having attended public school in the past.

“I think we are simply not good enough, this is a school where you have to speak English and understand all the subjects. It is not like a government school where you can graduate anyhow. So the girls want to just write their SSCE and move ahead with their studies in any university because they are just tired of this programme.”

When contacted, the secretary Chibok Parents Association, Lawan Zannah urged the federal government to keep its promise and ensure release or the remaining 112 girls still in Boko Haram captivity, saying parents could not describe the pain they endured in the last seven years.

He believed that the government had been fair to the freed girls by sponsoring their education and upkeep at the AUN to prepare them for the final O level examination, which would qualify them for admission into the undergraduate programme, saying the issue now was the fate of 112 girls who remained in the forest.

Daily Trust learnt that some of the freed girls were nearly kidnapped again last year during school vacation when gunmen attacked their villages twice including on Christmas eve, forcing them to run to the bush for safety.

10 of our daughters withdraw from school

In 2020, the Kibaku (Chibok) Area Development Association (KADA) had in a statement jointly signed by the National President, Dauda Ndirpaya Iliya and the Publicity Director, Manasseh Allen, said that 10 of the Chibok girls had withdrawn from the foundation programme at the AUN due to alleged lack of progress.

“Ten of them have out of frustration left the programme, they are: Laraba Mamman, Mwa Daniel, Rachael Nkeki (who are now married), Saraya Yanga, Philomena Dauda, Sarah Nkeki, Asabe Lawan, Glory Mainta, Talatu Adamu, and Lydia Habila. They remain uncertain when they shall be writing their O Level final examinations, and so forth. In the school, they are isolated and not allowed to mingle, interact, and socialise with other students which would have been a means of learning, and continuous psychosocial therapy.

According to him, sometime in August 2018, Maryam Wavi, Asabe Goni, Amina Ali Nkeki, Saratu Emmunuel, Rebecca Ishaku were literally blocked at the airport by the police and State Security Service (SSS) who handed them along with their parents to the Nigerian Immigration Services and detained them until they missed their flight.

“They were on full scholarships to study in the United States, with the full consent of their parents and proper documentation. After they missed their flight, the immigration services let them go,” they said.

Nigeria yet to learn from Chibok tragedy