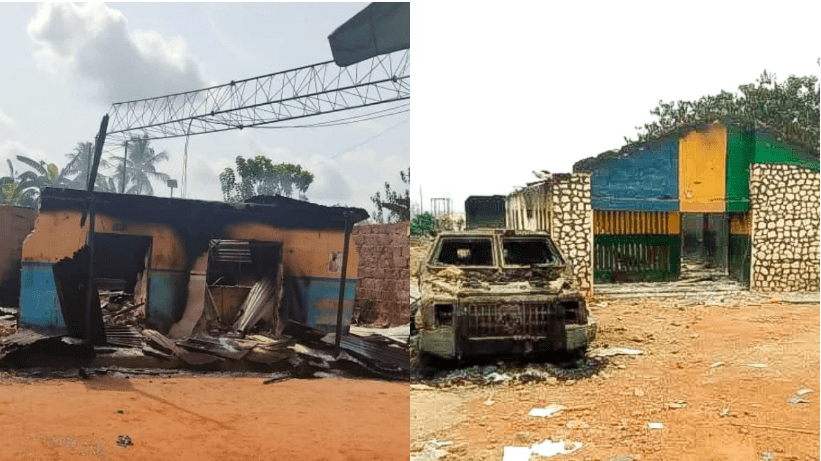 Since February when the first attack on police men commenced, rather than abate, there have been increasing cases of such attacks, in all the South eastern states, and this has spiralled into the South South, with states like Rivers, Delta, Akwa Ibom and Cross River getting its own share of the ugly incident.

What began as attacks on policemen on checkpoints in remote areas of states in the South East zone has further moved to taking battles right to the stations of policemen, killing them and burning down facilities, and most worrisome is that it is now happening in urban areas, some of the places deem to be the most protected.

DAILY POST reports that this has now become a worrisome trend in the zone, and has moved from just police facilities to other government institutions, with offices of the Independent National Electoral Commission (INEC) being burnt down in some states of the zone. More worrisome is that no one or group has owned up to the attacks, nor have they been any reason for the action.

As this continues, gradually, our reporter observes that the South East which used to be the safest part of the country in recent times is gradually descending into anarchy, with other forms of insecurity now plaguing the zone.

DAILY POST can authoritatively report that today, on every road in the South East, there is hardly any presence of policemen, while the few that can found are military. While the police whose job is to maintain peace in the country internally have disappeared, the military who should be concerned with ensuring that the country is safe from external aggression and any other that can threaten its sovereignty have now taken over the job of internal security.

The near absence of policemen in the society has taken an attendant effect on the society, with lawlessness becoming the order of the day today. Besides the Unknown gunmen who today terrorize every part of the zone, there have been cases of herdsmen killings in states of the zone, while not leaving out the twin problems of cultism and armed robbery, a result of the near absence of policemen.

Within the month of May, 2021, there have been attacks on police facilities in all the five south-eastern states of Nigeria, with attendant loss of property including vehicles and buildings, and in extreme cases, loss of lives.

Just as the month of May set in, two policemen were killed in an attack in Obosi, Idemili North LGA of Anambra State, while the station was razed down. This happened barely 24 hours after a new Commissioner of Police, Christopher Owolabi, assumed office in the State.

In Owerri, Imo State, a bunch of hoodlums invaded the Divisional Police Headquarters in Orlu and tried to burn down the facility, but a joint security operatives resisted them, and luck ran out on them this time and no fewer than eight of them were killed. The team also recovered seven vehicles the attackers came in with for the operation.

DAILY POST gathered that the gun duel created by the resistance sent panic into residents of the area, as people scampered for safety. A resident said: “we slept with our hearts in our hands last night,” just as some people were wounded by stray bullets as the operatives and the attackers battled each other.

Meanwhile, as this act of lawlessness continues, the attackers have moved from just burning down police stations and killing policemen to other government facilities. The target this time seems to be offices of the Independent National Electoral Commission. So far, three states of Abia, Enugu and Imo have had INEC offices in their states burnt down.

Just two days ago, some hoodlums launched an attack on a police station in Abia, killing two policemen in an early morning attack at the Ubakala Police station in Umuahia South council area of Abia State. The bandits also carted away two rifles belonging to the slain policemen. The hoodlums also destroyed vehicles, tricycles and motorcycles parked in the compound, while setting ablaze the main building of the police station.

As if that wasn’t enough bad news, in Enugu, hoodlums attacked the state headquarters of the Independent National Electoral Commission, INEC, setting the foyer and six vehicles ablaze, while destroying two other vehicles.

A week before that, the INEC office in Udenu Local Government Area of Enugu State was set ablaze. Before then, there was the destruction of the office in Essien Udim LGA of Akwa Ibom State on 2nd May, 2021. This was followed by the fire at the Ohafia LGA office in Abia State on 9th of May 2021.

So far, there have not been reports of any group owning up to the attacks or giving reasons for their action. But as a result of the attacks, DAILY POST gathered that conventional policing in the zone has stopped, while stations that have the courage to open no longer accept reports of crime. The attendant report is that crime level has gone up.

In Awka, cultism has gone a notch higher, with cases of cult killings going higher on a daily basis. In Amanyi and Ifite parts of Awka, no day passes by without cult clashes, while rival groups have also consistently gunned down opposition members.

In Onitsha, daylight robbery is now normal in several parts of the city, including Upper Iweka, Okpoko, Nkpor and Onitsha-Owerri Road. Travellers and passers-by are daily dispossessed of their belongings, while others watch with trepidation.

Addressing journalists upon his arrival for resumption of duty, CP Chris Owolabi disclosed that it would be hard for the command to continually put out men in the field, who risk being attacked and killed. “What we want to start doing is to move into the communities and even engage leaders and to sensitize the people on the need to stop this act of violence. The policeman is someone’s son, he is someone’s husband and he is someone’s father. He is also affected by whatever condition that others face.

“The police cannot police you if you do not give them the cooperation to do so. It is for that reason that we are appealing to the people to speak to whoever these people are on the need for peace to return again,” he said.

A lawyer, Mr Chukwudi Eze who spoke to our correspondent, however, said that policing in the South East has come to a halt, and that if this continues for long, the zone may descend to anarchy.

“The worst situation we have found ourselves now is that the criminal elements already know that governance has failed and the lawlessness is what prevails today, so they are acting with impunity, knowing that there is no one to call them to order by any means.

“Go to Onitsha today, you will find boys riding in a tricycle, and going from one shop to another robbing people in the full glare of everyone. They will start from one end of the street and visit all the shops in that street, and will not be in a hurry to leave. Even in traffic, they rob people and still remain in the same traffic in their keke, and no one will say anything. I saw a boy threatening a girl in a shop at UNIZIK junction the other day. He boldly told the girl that even if he killed her, that nothing would happen because police was no longer working, and what the boy said is true. The system has completely broken down.”

DAILY POST also gathered that an internal memo from the Police headquarters has banned policemen from dressing up in their uniforms from home. Rather, they are advised to carry them in bags and only wear them when they arrive at their offices. This as gathered was to stem the spate of attacks on them. Our correspondent was unable to verify the authenticity of the news as calls to the Anambra State Police Public Relations Officer, DSP Toochukwu Ikenga were not taken nor replied.

Mr Eze in proffering solution to the problem of insecurity stated that efforts must be made both by the federal government to get security chiefs to change tactics in dealing with the South East issue, adding that, “there can never be peace in a situation of injustice. Whether anyone likes it or not, the problem of lopsided appointments by the federal government is part of the reason there is insecurity in Nigeria today, especially the South East zone.”