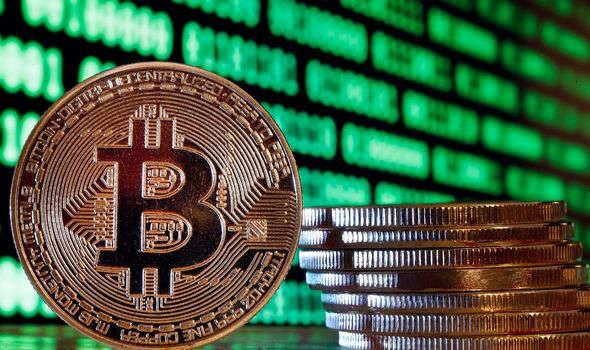 The price of the world’s most popular cryptocurrency has fallen by by more than eight percent since the start of Friday from £27,816 to just £25,562 at 7.30am on Monday.

Until just under two months ago, the price of Bitcoin had been dramatically surging, raising renewed hopes of a major fightback from the normally turbulent cryptocurrency markets.

The value skyrocketed to a record high of £45,882 on April 15 but has plummeted sharply ever since.

The latest crisis comes as a host of crypto-related accounts in China’s Twitter-like Weibo platform were blocked over the weekend as Beijing continues to come down hard on Bitcoin trading and mining.

Cryptocurrency experts have warned further actions are expected, such as linking illegal crypto activities in China more directly with the country’s criminal law

Just a couple of weeks ago, China’s State Council said it would be cracking down on Bitcoin mining and trading, which came days after three industry bodies banned crypto-related financial and payment services. Throughout the weekend, access to a number of widely followed crypto-related Weibo accounts was denied, with a message saying each account “violates laws and rules.”

NYU Law School adjunct professor Winston Ma, referring to the Tesla founder and cryptocurrency fan, said: “The government makes it clear that no Chinese version of Elon Musk can exist in the Chinese crypto market.”

Mr Ma, who has also written the book ‘The Digital War’, believes China’s supreme court will publish a judicial interpretation at some point that may connect crypto mining and trading businesses with China’s body of criminal law. The financial regulator said such an interpretation would address the legal ambiguity that has failed to clearly identify bitcoin trading businesses as “illegal operations”.

So far, all rules against cryptocurrencies in the country have been published by administrative bodies.

Bitcoin’s price had plummeted by more than seven percent overnight on Friday after a bizarre tweet from Elon Musk, with rival cryptocurrencies also plunging.

The dramatic fall in the value of cryptocurrencies was accompanied by a strange Tweet from the Tesla boss, who appeared to mock Bitcoin’s recent struggles. Tech billionaire Mr Musk has been extremely vocal on social media about the use and future of cryptocurrencies.

But his tweets and comments regularly trigger significant upward or downward movements in the volatile market.

In February, the price of Bitcoin surged to an all-time high after he tweeted Tesla would begin accepting payments of the digital currency for sales of their electric cars.

Bitcoin’s price jumped by a fifth (20 percent )after Tesla said it had made a $1.5billion investment.

The firm added it would eventually accept the cryptocurrency as payment for its cars. But on May 17, Bitcoin’s price plunged by almost 10 percent to its lowest since February after the Tesla boss hinted the electric carmaker may sell its cryptocurrency holdings.

The previous weekend, Mr Musk suggested the firm was considering selling or may have already sold some of its holdings in the cryptocurrency.

Bitcoin’s price drop was triggered by a tweet sent to the Tesla boss, which said: “Bitcoiners are going to slap themselves next quarter when they find out Tesla dumped the rest of their Bitcoin holdings.

“With the amount of hate [Elon Musk] is getting, I wouldn’t blame him.”

He later followed up that Tweet following the panic he had caused, and frankly wrote: “To clarify speculation, Tesla has not sold any Bitcoin.”

That latest blow for Bitcoin came a week after the Tesla chief executive said the company had stopped accepting Bitcoin as payment for its cars because of fears over its carbon emissions.

He announced the carmaker had stopped vehicle purchases with the cryptocurrency because of “rapidly increasing use of fossil fuels for Bitcoin mining”.

The Tesla boss tweeted: “We are concerned about rapidly increasing use of fossil fuels for Bitcoin mining and transactions, especially coal, which has the worst emissions of any fuel.”