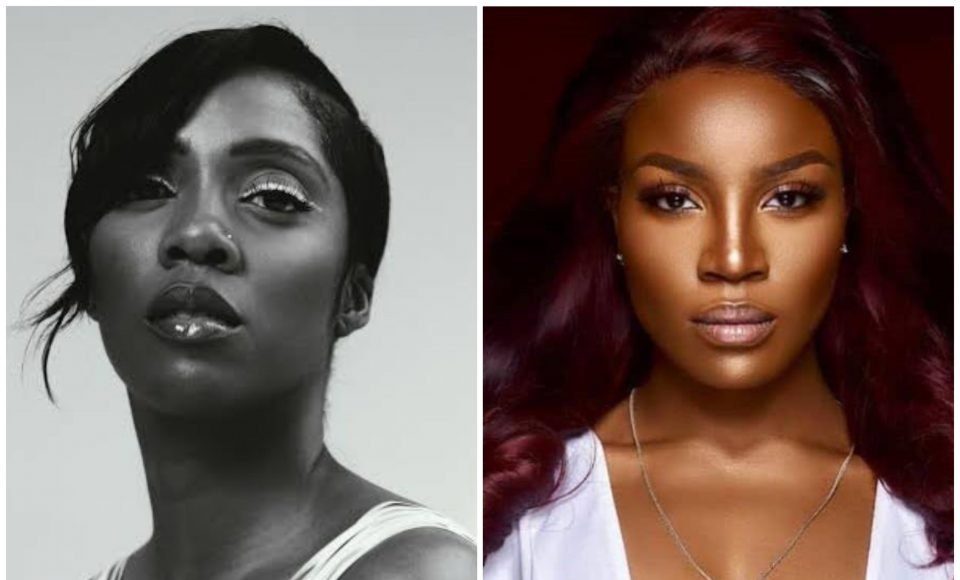 Popular singers, Tiwa Savage and Seyi Shay, were involved in a fight in a salon in Lagos, erupting mixed reactions from their fans.

In a video, which surfaced online, the duo was seen being pulled apart from getting physical at the salon as they threw altercations at each other.

The quarrel ensued when Seyi Shay walked up to singer Tiwa Savage at the salon to say hi, but Tiwa was not having it.

According to singer Tiwa Savage , Seyi Shay had no right to walk up to her to say hi, considering what she and Victoria Kimani had done to her in the past.

Seyi Shay and Victoria Kimani had in 2019 released their covers of Kizz Daniel’s hit song, ‘Fvck You’, where they had both dissed Tiwa Savage.

As singer Tiwa Savage and Seyi Shay came close to exchanging blows, their fans have taken to social media to take sides over the incident.

Popular crossdresser, Idris Okuneye, aka Bobrisky, wrote on Instagram, “Don’t call me out on social media and be forming hi in the corner. Keep that same energy when you meet me in person @tiwasavage.”

A tweep, @faithysia_blunt, wrote, “I love how Tiwa Savage addressed this issue with Seyi Shay. Like, don’t say hi to me, we are not friends. You can’t block me on Instagram and not block me in real life. This is my energy. Say it to people the way it is. After all that insult from Seyi and Victoria Kimani.”

Another Twitter user, @daddy_nomso, wrote, “Seyi Shay has snubbed Tiwa for years, slut-shamed her, denied her in interviews, subbed her on a freestyle and was laughing when Victoria Kimani was calling Tiwa ‘African Grandmother’… She deserves whatever Tiwa said to her.”

Also, @Olamideofficial pointed out that the scenario between both singers was a “typical example of how people shade you or say bad things behind your back and still have the effrontery to come at you with fake cool or laugh.”

“Seyi Shay was at fault to be honest. She and Victoria Kimani slut-shamed Tiwa Savage on their ‘Fvck You’ challenge verses. Tiwa was just mute all through and didn’t even throw shades. You can’t see her and tell her ‘hi’ and act like nothing happened now,” @manlikeIcey tweeted.

However, some people blamed singer Tiwa Savage for her reactions to Seyi Shay’s greeting.

“After a harmless ‘hi’, Tiwa could have just ignored or responded. What happened to calling her after all these years? Na only two of them do challenge?,” @meka_tio asked.

Another tweep, @wiziano_, said, ‘So Tiwa is mad about Seyi Shay’s ‘Fvck You’ challenge. Isn’t she supposed to be the matured one? Disappointed in our African bad girl.”

Amidst accusations on Seyi Shay, @chi_mobii tweeted, “Seyi shay should never apologise to Tiwa, she is actually bigger than Tiwa if you ask me.”