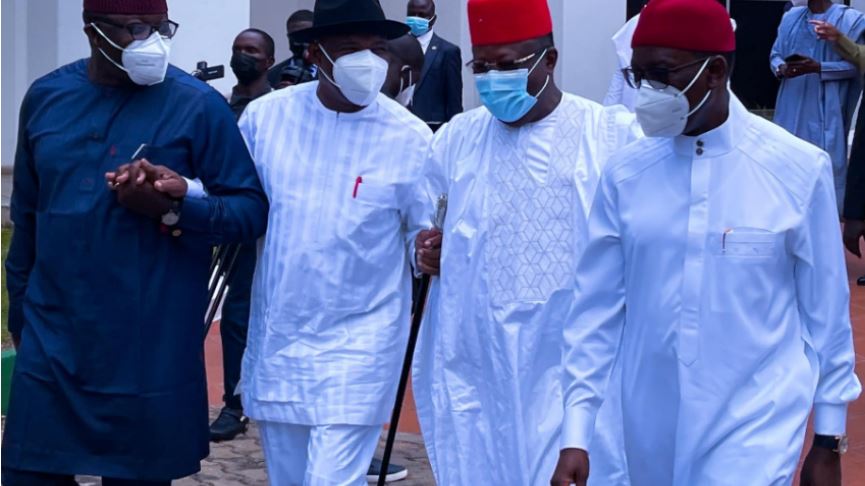 The Southern govs Forum has expressed support for the collection of the Value Added Tax by states.

The governors made their positions known on Thursday, during their meeting in Enugu on Thursday.

The disagreement over VAT started last month when the Federal High Court sitting in Port Harcourt, in a judgment in suit number FHC/PH/CS/149/2020, held that the Rivers State Government had the powers to collect VAT within its territory.

Although Rivers and Lagos states have started the process of collecting VAT within their territories, the Court of Appeal in a ruling on September 10 stopped the collection pending the determination of an appeal filed by the Federal Inland Revenue Service against the judgment of the Federal High Court sitting in Port Harcourt.

Apart from Lagos and Rivers states, Ogun State has also starting the process of passing a bill on VAT in its House of Assembly.

Reading the resolutions of the forum shortly after the meeting which was attended by nine governors and seven deputy Governors, the Chairman of the Forum and Governor of Ondo State, Rotimi Akeredolu (SAN), stated, “The meeting resolved to support the position that the collection of VAT falls within the powers of the states.”

The forum urged  governors that had not enacted the anti-open grazing law to do so without much delay.

Akeredolu, in the seven-point communiqué, said that the governors were satisfied with the rate states were enacting and amending the anti-open grazing laws in line with the uniform template and aspiration of the forum.

The communiqué reads: “the Southern Governors Forum expresses satisfaction with the rate at which the states in the southern Nigeria are enacting or amending the anti-open grazing laws which align with the uniform template and aspiration of Southern governors and encouraged the states that are yet to enact this law to do so expeditiously.

“Encouraged the full operationalization of already agreed regional security outfits; which would meet, share intelligence and collaborate, to ensure the security and safety of the region.

“Reaffirmed its earlier commitment to fiscal federalism as resolved at the inaugural meeting of the Forum held on Tuesday, 11th May 2021 at Asaba, Delta State and emphasized the need for the southern states to leverage the legislative competence of their respective State Houses of Assembly as well as representation in the National Assembly to pursue its inclusion in the Nigerian Constitution through the ongoing constitutional amendment.