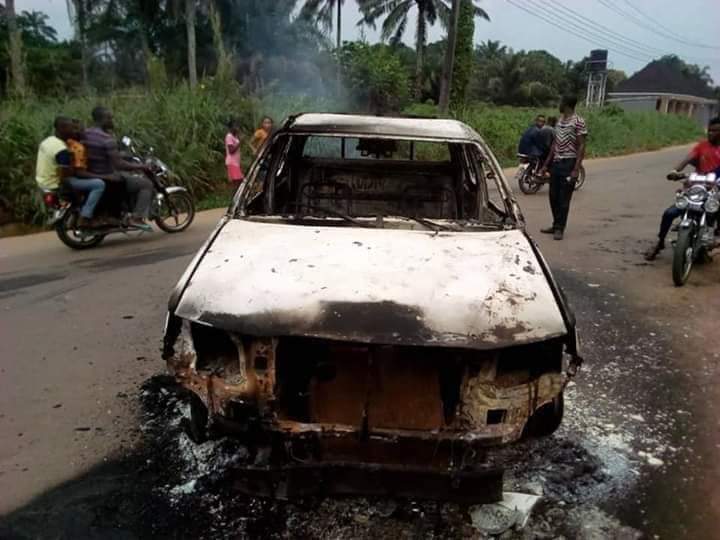 There is currently tension in Anambra State due to the widespread violence recorded in the buildup to the November governorship election.

Many politicians have gone into hiding as a result of the activities of rampaging gunmen.
The latest of such known attack happened on Friday when a policeman and the driver of a federal lawmaker were killed while a police station was set on fire.

Gunmen attacked the convoy of the lawmaker representing Nnewi North/Nnewi South/Ekwusigo Constituency in the House of Representatives, Chris Emeka Azubogu.

Azubogu, who defected to the ruling All Progressives Congress (APC) from the Peoples Democratic Party (PDP) few hours before the incident, was not in the convoy when the assailant struck.

Dethroned traditional ruler of Mkpunando Aguleri, Alex Edozieuno, was murdered weeks before the killing of Akunyili.

Andy Uba, governorship candidate of the APC in Anambra, on Saturday suspended the flag-off of his campaign due to the killings.

The outlawed Indigenous People of Biafra (IPOB) has been on rampage not just in Anambra but across the South East.

However, it is unclear if the killings in Anambra have political undertone or IPOB is behind them.

Currently, banners and bill boards bearing campaign massages are being pulled down while branded campaign vehicles are hardly seen on the streets.

Also, Nigerian coat of arms and flags have been removed in some public and government buildings for fear of the attack by gunmen.

However , there is a heavy security presence in the state.
The police special commando squad has over 30 Armoured Personnel Carriers (APCs) at major security flash points such as the River Niger bridge head, Upper Iweka, Nkpor, Abagana, Amawbia bye pass to the Enugu- Onitsha expressways as well as Oba junction along Onitsha-Owerri express way.

Also officers and men of the Nigeria Security and Civil Defence Corps (NSDC) have been deployed across the state.

According to a release by the Public Relations Officer of the command, Mr Okadigbo Damian, the state commandant, Mr. Everestus Chimezie Obiayo, has ordered the Head of Operations, Department of Intelligence and Investigations Department and Rapid Response Squad to coordinate security deployments and ensure that officers operate within the context of the law.

The Independent National Electoral Commission (INEC) has assured residents of Anambra of its preparedness for the election.