No less than 10 Nigerian politicians have been implicated in the Pandora Papers.

At least eight African countries featured in the document.

In all, there are 336 politicians listed in the document, according to the International Consortium of Investigative Journalists, which published the earth-shaking papers on Sunday.

The ‘Pandora Papers’ is an investigation based on one of the biggest-ever leaks of financial documents which, on Sunday, exposed a hidden world of shielded wealth belonging to hundreds of politicians and billionaires.

Considered as one of the largest ever global media investigations, the Pandora Papers involved more than 600 journalists who, together, analysed some 11.9 million documents from financial services companies around the world. 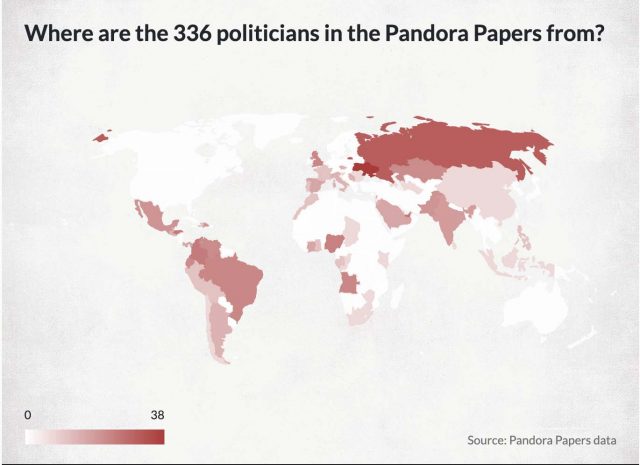 They found links between almost 1,000 companies in offshore havens and 336 high-level politicians and public officials, including more than a dozen serving heads of state and government.

According to an interactive map of the leaked documents, five Côte d’Ivoire politicians were helped by foreign agents to stash money suspected to be looted away from public view.

Ghana has three politicians listed in the documents, which has been described as “An offshore data tsunami.”

Chad, Kenya and Congo Brazzaville have two politicians each listed in the infamous documents that had reportedly sent shivers down the spines of public figures globally; while Gabon has three politicians listed.

Angola has nine politicians listed in the document, while Zimbabwe and South Africa have two each.