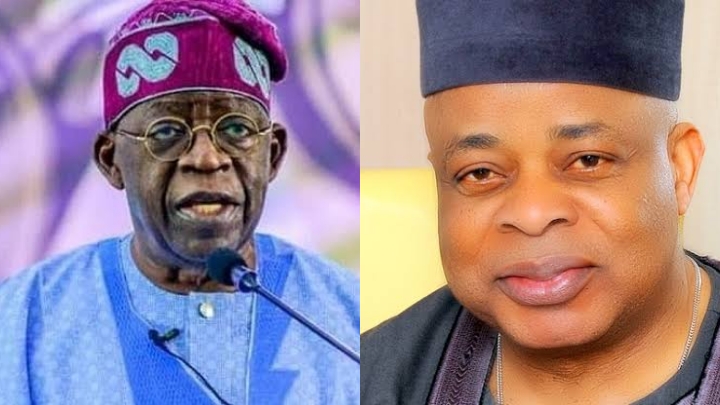 Some weeks ago, several bigwigs, including former Senate President Ken Nnamani, former Governor Sullivan Chime and former APC state chairman, Ben Nwoye, waited at the Akanu Ibiam International Airport for the arrival of Bola Tinubu, the presidential candidate of their party, the All Progressives Congress (APC).

After welcoming him with a masquerade, these leaders disappeared and refused to attend his campaign rally at Michael Okpara Square in the Coal City.

What happened at the rally finally brought the local rivalry in Enugu State APC to national attention. The party is currently divided into a group led by Mr Nnamani and the other led by state chairman, Ugo Agballah.

Ordinarily, for the past two election cycles, APC was rarely in conversation in Enugu State. The state has consistently voted PDP. The main opposition party has never lost any election in the state. However, several things have changed, or appear not to be the same ahead of the February presidential election.

First, the uncertainty created by the rebellious G5 governors, including Governor Ifeanyi Ugwuanyi of Enugu, has given other political parties, particularly the ruling APC and the Labour Party, rays of hope to possibly flip the state.

Less than 35 days to the presidential election, the G5 governors are yet to announce their preferred candidate. However, they continue to oppose the PDP candidate, Atiku Abubakar.

And the report of clandestine talks between G5 governors and Mr Tinubu in London has further wetted the seed of a possible alliance that could produce an outcome that has never happened in the state – a party other than PDP winning.

Shortly after the rally in Enugu, Mr Tinubu paid a visit to the governor at his official residence, fueling more speculations that a political collaboration may be at play in the state between the two, considering that Mr Tinubu has campaigned in several non-APC states but never visited the governors.

Secondly, there is the open endorsement of Mr Tinubu by a former governor of the state and founder of the Ebeano political dynasty, Chimaroke Nnamani, who is a senatorial candidate of the PDP.

Mr Nnamani, an advocate of power shift to southern Nigeria, has clearly stated that he will be supporting the PDP at the polls on a four out of five, that is, he will back the PDP at senatorial, House of Representatives, House of Assembly and governorship, but not the presidential election.

The National Working Committee of the party on Friday suspended Mr Nnamani for anti-party activities. But the senator has described the sanction as “ineffective and futile” and continued his campaign for the former Lagos State governor on Twitter with #citiBOY series, where he highlights some of the achievements of Mr Tinubu as governor of Lagos State.

Since the announcement of the suspension, campaign posters of Messrs Tinubu and Nnamani have also flooded the state.

However, doubt remains if the backing of these men will translate to votes, as APC is still being perceived by many in the South-east as an “outsider” party. Furthermore, the Labour Party and its presidential candidate appear to be formidable in the state and appear to be the likelier vehicle to reap from G5 governor’s rebellion.

Despite all the positive signals for the party, the local rivalry in the state chapter of the APC may further dim the chances of the party in the state.

Background to the crisis……….

In the past year, Ben Nwoye, who served as chairman of the party for eight years, and the current chairman, Ugo Agballah, have been in a tussle for control of the party. In May 2022, the state executive committee “expelled” Mr Nwoye and five other members for “anti party” activities.

Despite the decision of the SEC, Mr Nwoye continues to identify with the party and was at the airport to receive Mr Tinubu alongside some of the aggrieved leaders of the party that subsequently boycotted the rally at Okpara Square.

Speaking to PREMIUM TIMES, Mr Nwoye said the constant attacks by the APC chairman on Governor Ugwuanyi and Mr Nnamani were frustrating the effort to get the governor to work for Mr Tinubu in the presidential election.

He stated that Mr Agballah ought to have soft pedaled with his attacks on the leaders of the PDP considering the ongoing conversation on a possible alliance.

“The state chairman is busy insulting the governor, abusing their candidates— he does not have tact.

“The governorship candidate of the PDP, Peter Mbah, is a supporter of our president, Buhari. We are courting these people to work for Tinubu. He (Agballah) mounts the podium to insult everyone, including Senator Chimaroke Nnamani

“Vehicles used for the rally at the airport were brought from the Government House. We have PDP people in Enugu supporting our party—supporting Tinubu. That man is an Obidient chairman,” he said.

Mr Nwoye also accused the APC chairman of insulting the leaders of the APC in the state, including the Minister of Foreign Affairs, Geoffrey Onyeama. He stated that Mr Agballah is emboldened due to the support from the National Chairman of the party, Abdulahi Adamu.

“He abuses all those leaders you see. He abused the former Senate President, former governor, and former speaker—including a serving minister. He called the ninister a visiting European.

“He was brought into the party from outside the party. The national chairman ignored the letter written by the leaders. Adamu allowed the state chairman to insult leaders. Abdulahi Adamu thinks it is okay for such a person to be insulting our leaders.

“All these people you named are working for the party, including my humble self. I have a lot of advertisements I put up for Tinubu. We have an independent campaign council.

When asked how the alliance may affect other candidates of the APC, he said most APC candidates are paperweights, hence, the party must prioritise the election of Mr Tinubu.

Using the opponent of Chimaroke Nnamani as an example, Mr Nwoye said Adaku Ogbu-Aguocha, the APC senatorial candidate, is a featherweight.

“It is a featherweight APC opponent. We are talking about a two-term former governor (Chimaroke Nnamani), and a two-term senator. So we are not talking about a small person. He has political machinery. Some of his people are the ones working for Asiwaju. It is a question of instruction. There are three cards, vote for me for the Senate and vote Asiwaju—my concern is Tinubu.

“Senator Chimaroke has openly asked his supporters to vote for Tinubu, why would that concern us if somebody else is running under our party? And the person is not of the same weight as Nnamani and she not campaigning for Tinubu,” he said.

Mr Nwoye said the APC will win the election despite the division within the party because according to him, everyone is working for the emergence of Mr Tinubu.

When Mr Agballah was contacted, he told PREMIUM TIMES that the group is only concerned about the campaign purse. He added that they will not get a kobo as long as he remains the chairman of the party.

“They are interested in the legendary Asiwaju campaign purse. But as long as I am the chairman of the party, they will not see kobo of that funds. Four years ago, they collected the campaign funds and pocketed it. They did not give any to the party.

“We are glad they boycotted the rally so that the world would see that they had no hand in the growth of APC. The party has grown exponentially within one year of my leadership as chairman.

“They have a history, they are political turncoats. Sullivan Chime turned against those who put in power. These are historical turncoats.

He stated that Mr Nwoye and others applied the same strategy in 2019, promising the national body that PDP members will support the APC at the presidential election, only for the party to get less than 25 per cent of the votes cast in the state.

He accused Mr Nwoye and others of working for the governorship candidate of the PDP, Mr Mbah, at the expense of the APC candidate, Uche Nnaji. He described the aggrieved APC leaders as turncoats without the needed political capital to deliver.

Mr Agballah also dismissed the argument that his attacks on PDP members could jeopardise a possible alliance, noting that aggrieved APC leaders lack the political capital to bring Mr Nnamani to the table.

“I welcome anybody who will work for the party, but these people are not working for the party. If Chimaroke is interested in working for the APC, I will welcome him. But this is the same game they played in 2019, Ken (Nnamani) led the plan to bring PDP to work for the APC. They are comprado politicians. Does Chimaroke have respect for them? They are only interested in pretentious media appearances,” he said.

Since this interview, Mr Nwoye has declared support for Mr Mbah, the PDP governorship candidate, laying credence to some of the suspicions raised by Mr Agballah.

In a race that many are predicting could go into a second ballot, Mr TInubu being in the conversation in Enugu State appears to be a plus, but the wrangling in the party could further reduce the possibility.