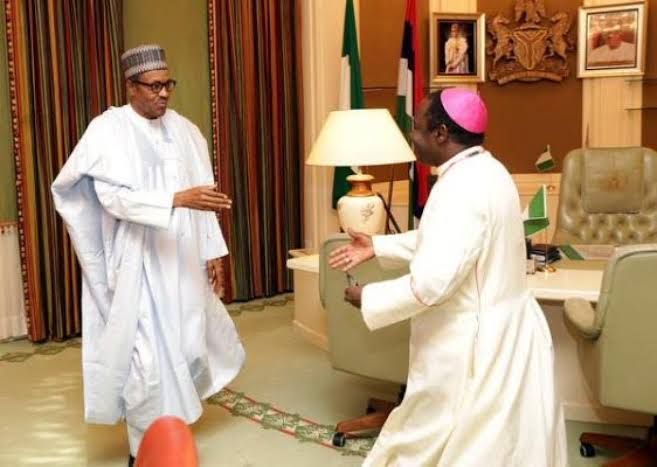 The Christian Association of Nigeria has accused the federal government and the president of Muslims Rights Concern, Professor Ishaq Akintola, of twisting Bishop Kukah ’s statement against the Muhammadu Buhari-led government.

It was gathered that  Kukah, bishop of Sokoto Catholic Diocese, recently issued a statement where he accused President Buhari of nepotism and incompetence.

The Bishop Kukah also claimed that there could have been a coup or war in the country if a non-northern Muslim becomes a president and does a fraction of what President Buhari has done.

Reacting to the statement, MURIC’s president, Professor Akintola criticised Bishop Kukah and accused him of disrespecting Islam. Specifically, he said Kukah described Islam as a violent religion. Also, the minister of information and culture, Lai Mohammed, in his reaction warned against making statements that can “trigger unintended consequences.” The minister stated that it is unbefitting of religious leaders to fan the embers of disunity and hatred.

The northern chapter of CAN has, however, defended Kukah, saying he never made any statement attacking Islam or calling for a coup, Vanguard reports. The Christian body, in a statement released on Monday, December 28, said Kukah’s statement was twisted.

The group said Professor Akintola’s earlier statement as a reaction to Kukah’s message was misleading. The Christian body said the focus of Bishop Kukah’s message was to condemn the widespread insecurity in the country, saying he never attacked Islam or called for a coup.

As the bishop’s statement led to a call for his arrest by Arewa youths, Senator Ben Murray-Bruce made a reconciliation move.

Murray-Bruce, a former Peoples Democratic Party (PDP)’s lawmaker who represented Bayelsa East in the eighth Senate, said he offered himself to bring President Buhari and Bishop Kukah together for a peaceful talk.

In a similar development, Dino Melaye, a former senator, has warned President Buhari against attempting to arrest Bishop Kukah for criticising his administration. Melaye said such an action against the religious leader would prompt a backlash from the people. He warned that if Kukah is arrested, the president will be shown that the government is not owned by him but by the people.

‘Repentant’ Bandit: I Led The Abduction Of Kankara Boys Because Gov Masari Dared Us

Prince Harry And Meghan Markle Have Reportedly Quit Social Media Due To The “Hate”...