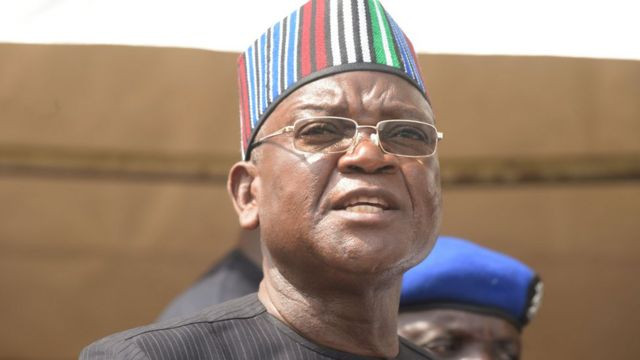 Samuel Ortom, governor of Benue, says all herders in the state must respect the laws on the illegality of bearing unlicensed arms.

Speaking on Monday while addressing reporters on the state of security in Benue, Ortom said if the herders are not ready to comply, they can relocate to Bauchi.

Recently, Bala Mohammed, governor of Bauchi, had said herdsmen have no option but to carry AK-47 to protect themselves.

Mohammed’s comment generated a lot of criticism, with many Nigerians stating that such positions encourage the illegal use of arms.

Ortom also condemned the statement, saying as far as he is concerned, it is against the constitution.

He also noted that contrary to Mohammed’s view that herdsmen could live anywhere in Nigeria, the constitution gives power to the governors to decide who can reside in their states.

“Nigeria is not governed anyhow. It is governed by the constitution of the federal republic of Nigeria. The constitution gives power to all our governors in all the states to preside over the land of their states on behalf of the people, and they’re the only people who can give allocation and can permit people to stay where they are. And so, bandits cannot find a forest and come in to hide under that forest,” Ortom said.

“Benue state is governed by the constitution of the federal republic of Nigeria. Benue state also has laws guiding them. Once you’re a Fulani man with legitimate papers, you are free to stay in Benue state and do business according to the laws of our land.

“Anyone who is not willing to respect the laws of our land should go and meet Bala Mohammed, and there you can carry AK-47, and you’ll not be apprehended. Here, when you come, we’ll apprehend you. I want this to be known.

“We are not against any tribe, especially the Fulani people, but rather against terrorists, killer herdsmen, bandits, kidnappers, and all types of criminals within the state.”