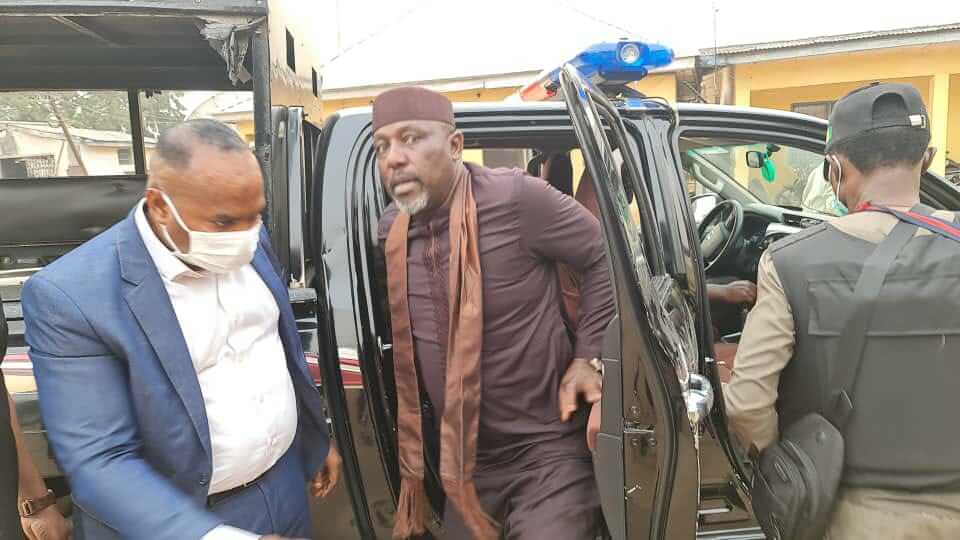 There was nothing to suggest that former governor of Imo state and Senator representing Orlu zone, Senator Rochas Anayo Okorocha, was going to be allegedly manhandled by some officials of the Imo state government. No inkling too, that he was going to be arrested and taken to the State Police CID for alleged detention.

Senator Okorocha, for sometime now, has been having some political skirmishes with his governor, Senator Hope Uzodinma and his government, over the issue an alleged properties, specifically a luxury Estate known as Royal Spring Palm Apartments, said to have been acquired by Rochas while in office as governor. While the Senator was said to have denied ownership of the sprawling Estate, the Imo state government sealed off the Estate pending when contending issues were fully resolved.

But our Correspondent gathered that Senator Okorocha allegedly gained entry into the contentious property without any legal authority, despite the fact that the governor had ordered that the place be sealed off by the state government. It was the alleged attempt to force his way into the property that led to his reported molestation, arrest and brief detention by the Imo government whose officials led by governor Uzodinma’s Special Adviser on Special Duties, Chinasa Nwaneri, allegedly challenged.

Rochas, according to the Imo government officials, was said to have led the “destruction and vandalism of security vehicles and breaking into the property of Imo State government” probably in the mild fracas that ensued between him and the government officials. There were exchange of hot words between the former governor and the governor Uzodinma’s aide, Chinasa. “Who are you?” were the words both men used on each other in the heat of the fracas.

Senator Rochas Okorocha was accused by the government officials of leading “armed thugs”, on Sunday afternoon, “to break into the property of the state government, destroying security vehicles and other state government properties following the sealing of Royal spring Palm Apartment”.

This however, led to his arrest and brief detention at the Police State CID on Sunday. The news of the arrest of the former Imo governor quickly spread like wild fire on social and traditional media.

Meanwhile, Rochas has reacted officially to his arrest, describing the development as “unexpected, unprovoked and unwarranted attack” on him.

In a statement hurriedly issued on his behalf in Owerri, the Imo state capital, by his Media Adviser, Sam Onwuemeodo, Rochas alleged that “more than 1000 thugs, armed to teeth with knives and guns and led by Chinasa Nwaneri, governor Hope Uzodinma’s Special Adviser on Special Duties today, Sunday, Feb. 21, 2021, with the backing of armed policemen from Government House, attacked the former governor of the State and Senator representing Imo West Senatorial District, Senator Rochas Okorocha’s Convoy.

“They attacked and damaged all the Vehicles in his Convoy. They also attacked his personal aides. Senator Okorocha was with only his personal aides when the thugs unleashed the attack. This is the information we can give as at now. We are still watching events as they unfold.

“Okorocha has the strongest political structure in the state and teaming followers in the State. If he had expected the attacked, he would not have moved with his personal aides alone. Okorocha has never been a violent man. This planned attack but unprovoked and unwarranted, has opened a new, but ugly chapter in the politics of the State. We shall react fully to the situation”, the statement said.

According to Onwuemeodo, Rochas has regained his freedom. He also said that “His Excellency, Owelle Rochas Okorocha has been at his private residence in Owerri since 7pm Sunday. Sunday, February 21, 2021 had marked or enthroned a new dimension to lmo politics. lt is not a good development for the state. The videos pushed out by the appointees and thugs of the Hope Uzodinma’s Administration on their own, had shown that Senator Okorocha was only with his 4 personal aides at the time he was attacked by more than 1000 thugs from the state Government and supported by the police from Government House.

“If Okorocha had been with even ten members of his political family, the incident would not have been one sided episode. But to God be the GLORY that Okorocha was not the aggressor.”, Sam Onwuemeodo said. NNL.