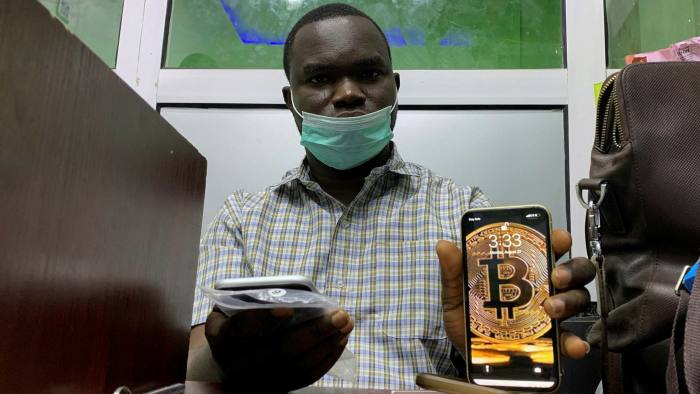 With savings of just under $80 and a salary of $50 a month, Promise Nwabueze, a social media manager in south-east Nigeria, decided to invest all he had into cryptocurrency. The gamble paid off. Within months, his savings had increased fivefold. They have continued to rise ever since.

“Presently my total net worth is $2,500 — I’m sorry I’m being so excited, but it’s incredible,” he laughed, speaking by phone from Benin City, where he was teaching a class on crypto trading. “Now I am teaching so many people because the idea is to lift up [people] in Nigeria.”

Africa may have the world’s smallest crypto market, with just a 2 per cent share of global trade, according to a 2020 report by US blockchain research firm Chainalysis. But, with the value of bitcoin in circulation just under $1tn and each bitcoin selling for about $50,000, it has the largest proportion of retail users doing transactions under $10,000, according to Chainalysis.

Some observers, including the Central Bank of Nigeria, have expressed concerns that inexperienced investors could lose their meagre savings gambling on a highly speculative asset. “Small retail and unsophisticated investors also face high probability of loss due to the high volatility of the investments in recent times,” the bank said, as it sought to clamp down on the trade. Bitcoin experienced a similarly wild upswing in 2017, only to then plunge 80 per cent from its peak.

But Idayat Hassan, head of the Abuja-based Centre for Democracy and Development, said the crypto rally has been so strong that “citizens are not concerned about the potential losses but instead the immediate gains they make . . . because they are not losing”. There’s a sense of euphoria in part because it “gives the young people hope and represents opportunities” in a country where joblessness is rife, she said, noting that even her father was interested in trading cryptocurrencies.

“We are the poverty capital of the world,” Nwabueze said, explaining the popularity of cryptocurrencies. “The economic strength of our country is not really encouraging — our GDP, our inflation, unemployment is on the rise, and the jobs that are available do not really pay enough to put food on your table.”

Nigerians turned to bitcoin when the government froze the bank accounts of leaders of the EndSARS protests against police brutality that swept the country last autumn. Supporters began donating to the cause using bitcoin, a practice that was encouraged by the likes of Twitter chief executive Jack Dorsey.

The frenzy over digital currencies prompted the central bank to reiterate 2017 guidance prohibiting local banks from serving customers with crypto accounts. In a memo this month defending its decision, the bank argued that cryptocurrencies were prone to use by criminals, drug traffickers and terrorists. But the central bank’s message “had the opposite effect the CBN wanted it to have”, said Ibukun Akinnawo, who hosts an investment club for mostly Nigerian 9-to-5ers on the social networking app Clubhouse and has invested in digital currencies. “People were now really wanting to talk about crypto.”

In the wake of the crackdown, Nigerian traders turned to peer-to-peer markets, which allow users to sell digital money to each other in exchange for real money or other digital currencies.

Yele Bademosi, the founder of Bundle, a Nigerian crypto and cash payments app, said volumes on his exchange remained high after the central bank ruling because people relied on peer-to-peer markets. He said the CBN crackdown could push crypto the way of the Nigerian naira, the local currency in which there is a thriving black market. “It’s going to look a lot more like the parallel market FX situation,” he said.

Victor Asemota, an investor and longtime leader of the Nigerian tech scene, attributed demand for cryptocurrencies to the CBN’s efforts to prop up the naira. These efforts have been criticised by the IMF and World Bank. Officially, the naira trades at about 380 to the dollar, compared to roughly 470 on the black, or parallel, market.

He argued that the bank’s latest pronouncement would hit already weak foreign investment into Nigeria, alarming investors who might have thought of using digital currencies to repatriate funds. “What everyone has always been afraid of is that Nigerian government policies are inconsistent,” said Asemota. The move shows “the government is totally out of touch with the economy”.

A senior banking executive said the CBN’s policy had annoyed “the kids”. “They are hopping mad! They see this as a deliberate attempt by the authorities to stifle their financial independence, especially given the role crypto played in the EndSARS protest,” he said. “To the rest of us gnarled, old cynics, it’s just par for the CBN course of stifling anything and everything they don’t understand or can’t fully control.”

For now, investors are sanguine about the chance of losses, focusing instead on the possibilities offered by cryptocurrencies. Chinyere Ofoegbu, 30, saved up $150 while working an office job that paid $210 a month, invested in crypto and says she has seen her savings grow. “I’m not one that likes to badmouth my country, but it can be really, really difficult being a Nigerian and living in Nigeria,” she said. “These people have a lot of responsibilities and don’t want to commit fraud . . . so people are looking for safe, healthy alternatives. And that is where cryptocurrency comes in.”

Nwabueze warns his students about risk, and makes clear he’s not offering financial advice to avoid liability. But “losing is part of the game”, he said. “If you don’t lose, you can’t win. If you don’t want to lose then put your money in the bank and get your 2 per cent. But if you [ want] to make money, you should know that it’s going to be a rough ride.”