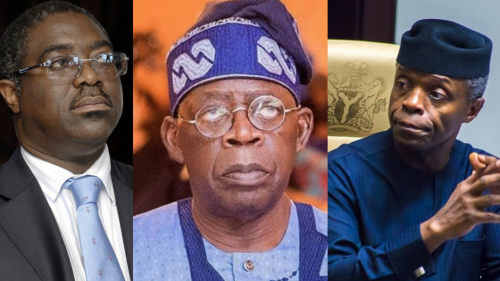 A Presidency cabal has succeeded in caging Vice President Yemi Osinbajo through the probe of a former Chairman of the Federal Inland Revenue Service, Tunde Fowler – both of whom are godsons to former Lagos State Governor and National Leader of the All Progressives Congress, Bola Tinubu.

SaharaReporters gathered that the Attorney-General of the Federation and Minister for Justice, Abubakar Malami (SAN) is central to the caging of the Vice President, Osinbajo; the former FIRS chairman’s probe by the Economic and Financial Crimes and Commission, and the investigation recently initiated against Tinubu.

Malami, it was learnt, is eyeing the 2023 presidency.

SaharaReporters learnt that the probe of Tinubu is to force the APC leader to abandon his 2023 presidential ambition for the “candidate anointed” by President Muhammadu Buhari.

Fowler’s probe began in November 2020, when he was arrested by the EFCC over alleged massive fraud in the FIRS.

Top sources in the presidency revealed that the cabal would intensify the probe of Tinubu to force him to abandon the presidential race before the end of 2021.

SaharaReporters had reported on March 1 that Malami’s bid for the Presidency would rely heavily on funds from the EFCC under the new chairmanship, Abdulrasheed Bawa, who was positioned to “deal with” political enemies ahead of 2023.

Sources however said revelations made by Fowler during his interrogation, which linked Tinubu to alleged fraudulent activities and Alpha Beta Consulting, gave the people after him the kind of information they needed to perfect their plans.

Alpha Beta Consulting was awarded a contract by the Tinubu-led government after a recommendation by a committee comprising Prof Osinbajo, while he was the attorney-general of Lagos State; Mr Wale Edun, the then state commissioner for finance; and a former commissioner for economic planning and budget, Yemi Cardoso.

The firm was subsequently given exclusive rights to collect taxes on behalf of Lagos State and was believed to receive about 10 percent commission from the revenue it collected for the state.

“Tinubu’s case came from revelations from Fowler. Fowler was originally arrested over an attempt by the cabal to cage Osinbajo completely. There were allegations that Osinbajo did some deals with Fowler. Fowler started revealing how money was being shipped to Tinubu and Alpha Beta.

“While shaking up Fowler, he confessed that he took from the Federal Inland Revenue Service N12 billion for himself,” a top source privy to the investigation told SaharaReporters.

A petition submitted to the EFCC in July 2018 by Dapo Apara, the former Managing Director and Chief Executive Officer of Alpha Beta, had alleged that Alpha Beta owed the Nigerian government N100 billion in unpaid taxes spanning over 10 years.

He alleged that the firm was being protected by powerful politicians and that it laundered funds through another firm, Ocean Trust Limited.

The petition by Apara’s lawyer, Adetunji Adegboyega, read in part, “Over the years, the company (Alpha Beta) has been protected and shielded by some powerful politicians and people in the society which made them to always boast of being untouchable.”

The source said, “Of course, Apara’s petition also sealed Tinubu’s fate. They want Tinubu to abandon the presidency before the end of 2021.

“Malami’s house in Gwarimpa has become a Mecca for politicians. They want to get Tinubu out of the way.”

The EFCC was reported earlier this week to have written to the Code of Conduct Bureau requesting copies of Tinubu’s Asset Declaration form.

A copy of the request letter had revealed that the investigation into Tinubu began last year after the removal of erstwhile Chairman, Ibrahim Magu.
The letter marked CR/3000/EFCC/LS/Vol4/322, dated November 6, 2020, had been signed by the then Lagos zonal head, Abdulrasheed Bawa, who is now the Chairman of the EFCC.

“In view of the above, you are kindly requested to furnish the commission with the outstanding requested information of Bola Ahmed Adekunle Tinubu. This request is made pursuant to Section 38(1) and (2) of the EFCC Act 2004,” the letter partly read.

SaharaReporters had on February 24 reported that Tinubu indeed has court cases around massive frauds hanging on his neck.

One of them was uncovered in 2018 when Alpa Beta was caught at the centre of N100 billion fraud, tax evasion, and money laundering, based on the petition written by Apara.

Also according to Apara’s petition to the EFCC, Alpha Beta “has become an avenue for official corruption of government officials, a conduit pipe for a massive money-laundering scheme, tax evasion, among other vices.”

In the petition, sent on his behalf by Adetunji Adegboyega ESG, his solicitors, Apara had said, “Over the years the company is being protected and shielded by some powerful politicians and people in the society which made them to always boast of being untouchable, but our client, feeling the need not to keep quiet again and strengthened by his belief in the fact that the government of President Muhammadu Buhari is keen on fighting corruption, which has been the bane of our country, is of the firm belief that it’s time to expose and open the can of worms called Alphabeta Consulting.”

Alpha Beta first became known when it was appointed as a consultant to the Lagos State Government, arguably its first client, under the tenure of Babatunde Fowler as the Chief Executive Officer/Executive Chairman of the Lagos State Board of Internal Revenue from 2005 to 2014.

The company had got the appointment when Tinubu was Governor of Lagos State. The speculation, which has yet to be dissipated since then, is that Tinubu completely owns or is a major shareholder in the company.

In the same vein, the state has also never denied claims that the company takes about 10 percent of the internally generated revenue of Lagos, estimated in 2016 to be about N40 billion every month.

The court process was still on when on October 27, 2020, hoodlums burnt relevant documents during the riotous violence that followed the peaceful #EndSARS protest in the state.

The court papers donating charges brought against Tinubu, his tax consultancy firm, Alpha Beta Consulting, by the former MD of the firm, Apara, were burnt according to claims by Tade Ipadeola, Apara’s lawyer.

“Everything in Igbosere High Court got burnt, including the registrar’s copy of our application. In fact, the whole building was burnt to ashes. So, we will have to file again. The registry has been moved to Ikeja.

“We may have to file the case afresh at the Ikeja High Court but we have not yet been instructed to do so,” he had said on October 27, 2020.

Apara had claimed in the documents that Tinubu, suspiciously diverted N22,360,000,000 and $4,396,063 from the firm’s account to that of Vintage Press Ltd, publisher of The Nation Newspaper.