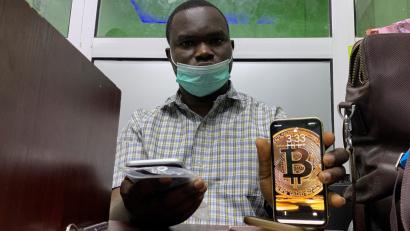 Even if bitcoin loses favor with the celebrity backers helping to boost its value, there are legions of lesser-known diehards standing by its side.

That’s partly because the wildly popular cryptocurrency is not just a hot investment for hedge funders and corporate moguls—it’s become a cost-effective way to transfer money throughout the developing world. Nowhere is this clearer than in Nigeria, where the central bank is so worried about Nigerians choosing cryptocurrencies over the naira for overseas remittance payments that it is now paying them to use official channels for those transfers instead. The central bank announced the scheme after international remittances inflows plummeted last year, as more Nigerians abandoned official banking channels by turning to cheaper cryptocurrency exchanges. The move came on the heels of a nationwide crackdown on banks dealing in cryptocurrencies, which the government enacted in an attempt to counteract the naira’s declining value.

Other emerging market central banks in Latin America, India, and Southeast Asia, where remittances make up a significant share of the economy, are in a similar bind. Bitcoin transfers surged in emerging markets last year, as the pandemic accelerated the rise of cheaper, more efficient digital remittance services.