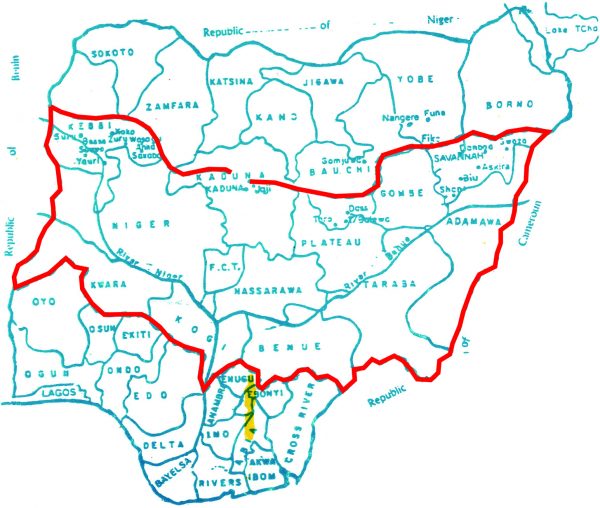 The Middle Belt Forum on Sunday faulted the recent attack on Governor Samuel Ortom of Benue State by alleged Fulani armed bandits, describing it as “a declaration of war.”

The organization stressed that such assault was aimed at overwhelming “the Governor and the entire democratic structure in that state which is a coup d’état.”

The MBF affirmed that the “indigenous peoples of the Niger Area and Benue Valley hereby give notice that it is no longer comfortable in the unhappy marriage for the convenience of the Arewa and is ready and prepared to forge ahead as an entity of its own or in alliance with other groups/regions who are prepared to cast off the chains of Fulani hegemony.”

While expressing shock at the reckless, daring, audacious and brazen attack on Ortom, the Middle Belt Forum expressed dismay at the incapacity of security agents to apprehend Miyetti Kyauta Hore said to have masterminded the attack.

They warned that sending a “detachment of operatives to investigate a crime whose perpetrators are known” was not enough response from the Federal Government.

The Middle Belt Forum commended the Nigerian Governors’ Forum and Governor Nyesom Wike of Rivers State who warned that the nation risked disintegration if any harm were to befall Ortom.

Wike’s position, it said, “is in tandem with that of the Middle Belt region.”

While insisting that either “on account of incompetence or collusion,” the Federal Government “has failed in its primary constitutional responsibility of protecting lives and property of Nigerians, leading to the takeover of the Nigerian space by merchants of death, kidnappers, rapists and other brigands,” the MBF resolved that “the Middle Belt Region stand solidly behind His Excellency, Governor Samuel Ortom in his brave and courageous defence of the people of Benue State from the persistent and unending attack by Fulani marauders whose open agenda is the Fulanisation of Nigeria, in general, and the occupation of the Benue Valley, in particular, and warns these marauders and their sponsors that if any harm were to befall Governor Ortom that incident will be a declaration of war on the indigenous peoples of the Middle Belt which will be repelled with all the fury and force at their disposal.”

The meeting also appealed to the “indigenous peoples of the Middle Belt to take urgent and deliberate steps to protect themselves and their communities from these merchants of death, kidnappers, rapists and marauders; and to resist all attempts by the Federal Government and security agencies to disarm them and render them easy pickings for these killer machines.”

The communique reads, “The conditions that led to the demand for the creation of a separate region for ethnic nationalities within the Middle Belt Region at the Willinks Commission in 1948 are still with us, and only surpassed by an urgency borne out of desperation, making the severing of the Lugardian umbilical cord binding Nigerians imperative as the recent declassification of British colonial documents have revealed that the Northern Regional Government, the Northern Peoples’ Congress and British colonial officers played conspiratorial roles in subjugating the rights of ethnic nationalities in the Middle Belt to serve the interest of Fulani oligarchy.”ce