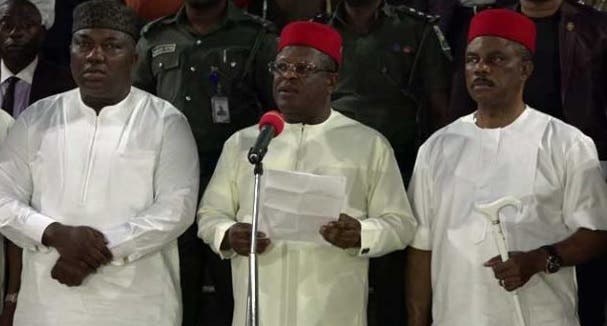 A Coalition of South East Youth Leaders, COSEYL, has cautioned governors in the zone particularly Gov. Ifeanyi Ugwuanyi of Enugu State; and his Ebonyi State counterpart, David Umahi; to learn from the fate of the late Oba of Ilorin, Afonja, who received Fulani migrants in his kingdom against the will of his subjects only to get killed afterwards by his visitors.

COSEYL’s note of warning is coming on the heels of last week’s simultaneous killings in Enugu and Ebonyi communities by   herdsmen.

The youths regretted that South East Leaders are yet to wake to the realities and the true motive of  strangers in the zone pretending to be herders.

COSEYL in a joint press statement by its President General, Hon. Goodluck Egwu Ibem; and Secretary, Comrade Kanice Igwe, asked South East Leaders not to allow the zone to be taken over by invaders.

The statement read in part: “We call on Governor Umahi to learn from what happened to Afonja, the Oba of Ilorin in 1824. Afonja received the Sheu Alimi also known as Salih Janta with open arms in Ilorin.

“Abdulsalam, the son of Sheu Alimi turned around to kill Afonja and made himself the Emir of Ilorin. Indeed life is too short to learn from our mistakes, its better we learn from the mistake of others.

“It is not a mere coincidence for Fulani militia to attack Ebonyi and Enugu States killing over 30 persons the same time President Buhari  travelled out of the country.”

COSEYL alleged that “Fulani herders are in South East for a hidden agenda” other than cattle rearing as they claim.

The youth leaders ordered every Fulani on evil mission to vacate South East immediately or brace up for the wrath of Igbo youths.

“We warn all armed   herdsmen to immediately vacate the South East zone.

” It is now very clear to all that they are not herdsmen which they claim to be but killers and land grabbers on a hidden mission to grab and overrun Igbo-land and convert  it to Fulani  territory.”“

The group tasked all Igbo youths to immediately form vigilante outfits to safeguard their local communities.

“We call on all the youths in Igbo communities to immediately secure their villages and forests with their local vigilante  so that their community will not be  overran by Fulani herdsmen who from all indications have the backing of unseen forces to do so.”

COSEYL accused the security agencies of maintaining criminal silence over the atrocities of the Fulani in Southern Nigeria, wondering what would have been the fate of Ndigbo in the North if they attack their host community.

“We also condemn in totality what now looks like deliberate silence of the Inspector General of Police, IGP, the Chief Of Army Staff  and other security chiefs who have kept silence over the wanton killings by  herdsmen in the South East.

“Up till now, nothing meaningful has been done over the assassination attempt on the governor of Benue State, Governor Ortom. The whole scenario is a calculated plan to overrun the south and Christian communities in the country.

“The security chiefs have never arrested any herdsmen for any killing but only go after armless protesters from the southern part of the country while allowing arm-wielding Fulani herdsmen to have a free day killing people at will and walking away with it.”