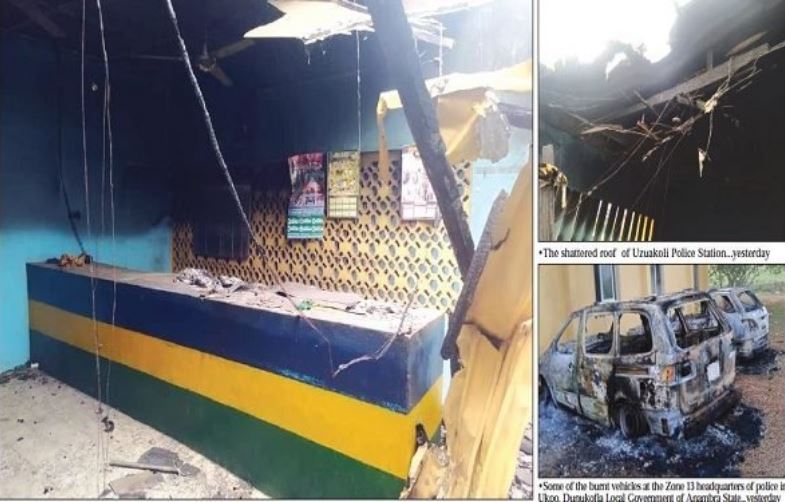 More policemen and stations came under attack in two Southeast states on Monday.

Gunmen killed two policemen in Anambra State and set a station ablaze in Abia State as the wave of attacks on police formations worsened.

The incidents occurred in the early hours.

The assailants overpowered the policemen on duty in Uzoakoli and released suspects held in custody.

Abia State command spokesman Geoffrey Ogbonna did not respond when contacted yesterday, but a source told our correspondent that the attackers used dynamites and rocket launchers to gain access.

The source added that policemen on duty tried to resist the attack but were overpowered.

The attackers burnt the police building, patrol vans, other vehicles, motorcycles and tricycles, some of which were exhibits.

It was learnt that nobody died and no firearm was carted away.

Another police source, who pleaded not to be named because he was not authorised to speak, said two policemen were killed in the Anambra attack.

“They killed two of our men, while our men gunned down three attackers, but they took their bodies away.

“Those hoodlums came in their numbers totalling over 20, but our men were equal to the task,” the source said.

Another policeman added: “Our men prevented them from having access to our armoury.”

But, the police said nobody was killed and that two of their men were injured during an exchange of gunfire with the hoodlums, three of whom were killed.

One of the buildings in the zonal headquarters was razed; four vehicles were burnt.

“The attackers, who came in their numbers shooting sporadically to gain access to the facility, were repelled by police personnel on duty who showed profound gallantry in the face of the seemingly overwhelming attack.

“Following the inability of the attackers to access the facility, they cowardly threw petrol bombs and improvised explosive devices (IEDs) on vehicles within the periphery of the headquarters.

“One L7A2 general-purpose machine gun (GPMG), 92 rounds of 7.62mm live ammunition, one locally-made smoke pistol and an axe were recovered.

“The Commissioner of Police, Anambra State Police Command, Kuryas Monday, who is also standing in for the Zonal Assistant Inspector General of Police, has commended the Police operatives for putting up a strong resistance against the attackers.

The police urged medical facilities in the state to admit and report to the nearest police station anyone seeking medical attention for bullet wounds and related injuries.

“The CP has called on citizens in the state not to panic but to go about their lawful duties while assuring of the command’s resolve to re-dominate, reclaim and secure all public spaces as directed by the Inspector General of Police,” Nwode said.

Killing of policemen and security operatives has become a pastime in the Southeast.

Only Enugu State has been spared among the five states in the geo-political zone.

The Federal Government described the attack on the two police formation as an act of terrorism.

Police Affairs Minister Muhammad   Dingyadi, said  “person(s) with a penchant for terrorism and violent crimes, threatening peace and stability in the Southeast and elsewhere in Nigeria,’’ would no longer be allowed to have their way.

The minister, according to his Press Secretary, Osaigbovo Ehisienmen commended the police for repelling the attack and  recovering  a  General Purpose Machine Gun used by the gunmen.

“He calls on residents to deepen partnership with the Police by exposing enemies of peace and security to arrest the wave of crime in the region from festering into a bigger security crisis.”

Four persons were killed in Awka, the Anambra State capital, on Sunday night by gunmen.

The state command spokesman, Ikenga Tochukwu, said it was a case of a cult clash.

He said the command arrested five suspects, while the matter was still under investigation.

One of the victims was shot at the popular UNIZIK junction; the others were gunned down at different parts of Ifite, all in Awka South Local Government Area.

It was learnt that one of the victims was a fitness instructor in a gym and a councillor in one of the local government areas in the state.

He said: “We are disturbed by this story of gunmen who drive around in a convoy of SUV and other costly vehicles, armed to the teeth.

“The guns they collect from victims are used to attack the security personnel. The worst is that we don’t know where they come from.

“We have been warned by our heads to always be at alert. We are monitoring them. As you can see, policemen can no longer move freely. It is only the vigilante group that can freely move about now.

“It is more tasking for us. We plead with the state government to provide us with patrol vehicles to enable us to respond to distress calls and to patrol effectively.”