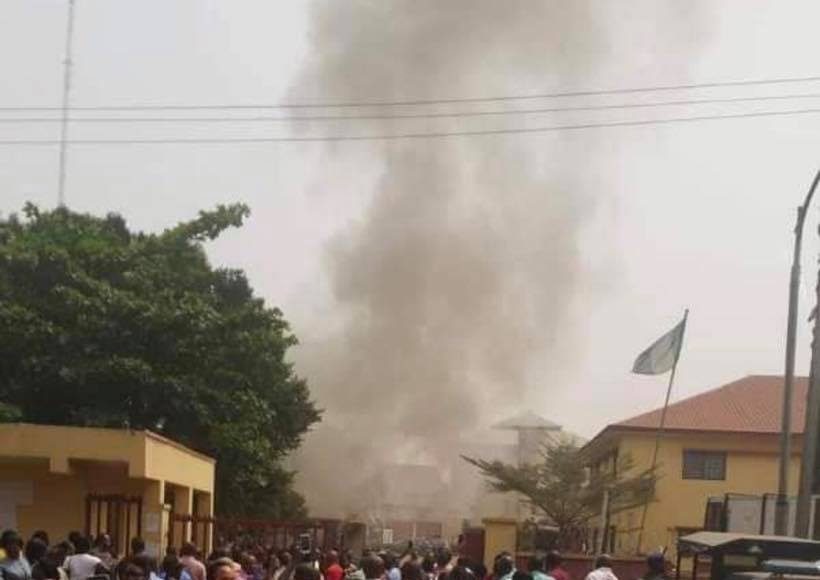 The News Agency of Nigeria (NAN) gathered that the armed attackers came in three Hilux trucks at about 8pm on Sunday, 23 May.

A witness who almost ran into the troubled area located in between the popular Ekwueme Square, Awka said the bandits exchanged gunfire with policemen for close to one hour at B Police Division.

They then moved to INEC office. Residents in the area on hearing the gunshots scampered into safety.

“I saw flames going up from the police station and INEC offices, but I cannot say whether people were killed or not because I did not go closer,” the witness said.

Other residents reported possibility of deaths, as the hoodlums appeared to have subdued the police before moving to INEC office.

Dr Nkwachukwu Orji, INEC Resident Electoral Commissioner in Anambra said he had received information on the attack in his office.

“I need to get clear picture of what happened in my office before I can speak”, he said.

INEC office Awka was gutted by fire in February 2019

DSP Tochukwu Ikenga, the state Police Public Relations Officer (PPRO) said he was still making contacts to get correct situation of things around the two federal institutions in the state.

Attacks on INEC and police offices have become rampant in both the South East and South South zones of Nigeria.