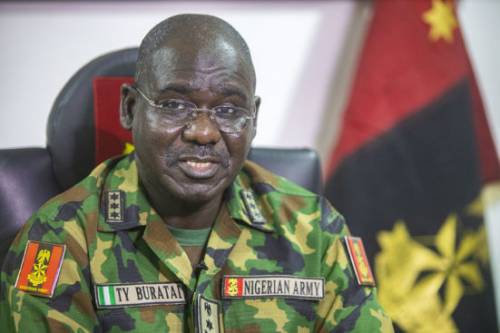 The 20th Army Chief Buratai (retd.), lobbied his way at the Presidency and the Ministry of Foreign Affairs to be posted to neighbouring Benin Republic for a number of reasons, military sources have informed SaharaReporters.

A week later, they were gifted with ambassadorial appointments – a decision condemned by a cross-section of Nigerians who believed that the former service chiefs should be probed particularly on the controversial $1 billion arms fund released between 2018 and 2019.

Military sources told SaharaReporters that one of the reasons Buratai, whose tenure was marred with complaints of non-payment of soldiers’ allowances as well as poor fighting weapons, lobbied Benin Republic was to keep his eye on military activities and decisions in Nigeria.

“The former army chief still has his loyalists and stooges in the Nigerian Army, expectedly who will stop at nothing to ensure that the infractions of his tenure remain covered up. Buhari’s administration cannot probe Buratai, certainly, because his loyalists know how to hide and manipulate the records. Buratai must be close by so that he can pull the strings to ensure that no probe or investigation is traced to him. Hence, his lobbying to be in Benin Republic,” a source said.

Another source stated that Buaratai lobbied the small West African country with little or no responsibility in order to be engrossed in a lot of diplomatic activities as to military oversight.

“Nothing happens in Benin Republic really. Buratai can be in Lagos or Kano or Borno and be overseeing Benin Republic from there. It is just a simple calculation. The Nigerian Army is now highly politicised and highly divided than ever, because the bad boys don’t want their records to be dug out. The government has refused to probe the six years of Buratai’s administration, despite the cries of the National Assembly over the $1 billion arms fund probe.

“They summoned the late army chief, Lt Gen Attahiru Ibrahim and that officer told them plainly that his predecessors and not him; should be summoned. Have they summoned Buratai and others? Not under Buhari,” another source stated.

President Muhammadu Buhari had on February 4 announced the nomination of the immediate past service chiefs as non-career ambassadors, a decision which was greeted with widespread condemnation.

The former service chiefs were appointed as non-career ambassadors-designate only a week after they were fired by the President.

On February 23, the Senate against resentments in several quarters had confirmed the nomination of the immediate past service chiefs as non-career ambassadors.

SaharaReporters had on January 21 exposed how the former service chiefs were awarded four Sport Utility Vehicles, four Peugeot vehicles, among other juicy retirement benefits according to the revised military conditions.

It was also revealed that the military chiefs would get security staff of over 40 soldiers as well as domestic and foreign medical cover.