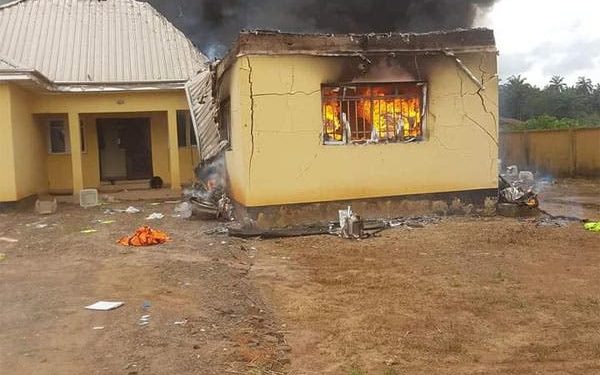 But the hoodlums were not that lucky as four of them were killed in a gun duel with the police.

An witness said the incident occurred at about 9 pm on Saturday.

Confirming the incident, Police Public Relation Officer, Bala Elkana, said: “The hoodlums in their number launched an offensive on Izombe Police Station but were repelled by the policemen on duty. Four hoodlums were neutralised during the attack, while others escaped with bullet wounds.”

He said a mop up operation had been launched  to arrest other fleeing members of the gang.

But Elkana claimed the station was not razed as the police prevented it from happening.

A statement by the National Commissioner and chairman Voters Education, Committee, Festus Okoye, said all documents and furniture inside were completely burnt.

According to the statement, the burnt INEC office  will be the eighth in the state razed after 2019 general elections.

The incident Okoye said had been reported to the police for further investigation.

The police said they have uncovered an illegal depot at Ogbo Oshishi (also known as Timber Market), Naze in Owerri North Local Government Area, where petroleum products were stored for onward transportation to locations targeted for attacks.

Elkana said the depot is made up of 14 shops stocked with the petroleum products suspected to have been obtained through bunkery.

He said one tanker truck, with registration number, GWA 568 AA, was intercepted discharging petroleum products into some drums and sacks using a Robin EY15 pumping machine, adding that both truck and the pumping machine were recovered.