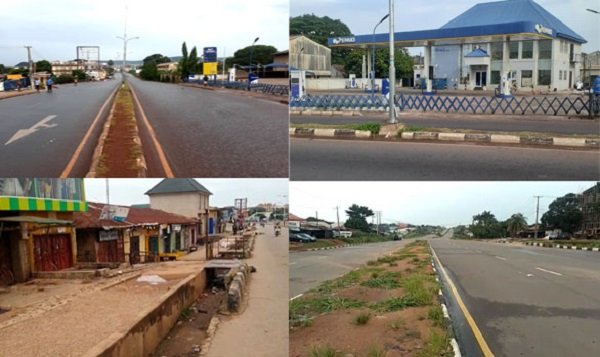 The sit-at-home directive by the proscribed Indigenous People of Biafra (IPOB) turned bloody yesterday in parts of the Southeast.

No fewer than three policemen were found dead in Enugu State.

Commercial activities were grounded in the five Southeast states as well as parts of Delta and Rivers states as residents complied with the directive, some out of fear of being harmed.

The bodies of three policemen were found in different parts of the state.

One of them was killed near the Central Bank of Nigeria (CBN) office on Okpara Avenue. Two were seen at the Mgbeme area of Coal Camp.

An eyewitness said: “I saw a police patrol van parked near CBN along Okpara Avenue. Beside it was a mobile policeman lying in a pull of his blood. I don’t know what exactly happened but the body was still lying there.”

When our correspondent contacted him again at about 8pm, he said: “When I confirm, I will let you people know, please.”

Commercial activities and vehicular movements were paralysed in the Enugu metropolis. Schools, markets, banks and parks were shut.

At least, two persons suspected to be IPOB members were killed in Abakaliki by the police in a shootout.

Our correspondent learnt that the duo was part of a group that attacked some residents at Nnodo, Ebebe junction and Ogbaga road.

The group had in the morning attacked some residents for allegedly flouting the sit-at-home directive.

A source in the area said the separatist supporters intercepted and burnt down some motorcycles belonging to some residents for flouting the order.

The Police sent a team of operatives to the area to disperse them and restore order.

Police Commissioner Aliyu Garba said it was the duty of the police to ensure that nobody’s right was trampled upon.

Residents, especially in Abakaliki, complied with the directive as streets were deserted.

Black marketers on major streets of Abakaliki cashed in to make brisk business. They sold petrol for between N200 and N350 per litre, following the closure of fuel outlets in the city.

A petrol station said to belong to Governor David Umahi was also closed.

Anambra roads, from Awka to Onitsha to Nnewi and Ekwulobia, looked like ghost cities. Vehicles were not seen despite security presence.

All the 63 big markets in the communities in Anambra were all closed; every shop in the state from Onitsha to Nnewi was under lock.

A businesswoman, Mrs Ebelechukwu Okafor, said it was better to be safe than sorry.

“My life is important to me. You can’t challenge those you don’t know. They’ve been warning us to stay at home and we have to obey. Life has no duplicate,” Mrs Okafor said.

A banker, who pleaded not to be named, said bankers got a directive from headquarters to stay off work.

A trader, Edwin Ekemezie, attributed the full compliance to a mixture of fear and sympathy among the residents of the state.

As at noon, newspaper vendors were yet to commence sales as no single national daily had landed in Onitsha.

Residents of Aba, the commercial centre of Abia State and their counterparts in Umuahia, the state capital, stayed home in compliance with the directive.

Some said they stayed away for their safety and that of their businesses.

Others said if staying at home was the only contribution they would make towards sending a strong message to the Federal Government over the marginalisation of the Southeast and in honour of Biafran fallen heroes, they would do it again.

The major markets, such as the Ariaria International market, were deserted. Banks and other businesses were closed.

There was total compliance in Imo State.

Our correspondent observed that, unlike previous years when the order witnessed minimal success, the Owerri capital city saw a total lockdown.

There was a heavy military presence in the state to check for possible violence.

All markets bubbled in the capital city and all roads were busy as residents went about their normal activities.

But there was partial compliance in Oyigbo Local Government Area where most residents stayed away from the streets out of fear of possible violence. All the popular markets in the area, including Eke Oyigbo ultra-modern market, had skeletal activities.

Commercial activities in Asaba, the Delta State capital, and environs were temporarily disrupted in compliance with the directive.

Schools, markets, banks, shops and other businesses were shut.

Security agents were positioned at strategic points across Asaba with patrol vans visible on major streets.

IPOB described the sit-at-home directive in honour of fallen heroes as 100 per cent successful throughout the Southeast.

In a statement by its Media and Publicity Secretary, Emma Powerful, the group said the success further demonstrated that the Biafra struggle was unstoppable.

The statement reads: “We the global family of the Indigenous People of Biafra (IPOB) ably led by our prophet and liberator, Mazi Nnamdi Kanu, are delighted to note that this year’s sit-at-home order in honour of our fallen heroes recorded 100 per cent success throughout Biafra land.

“We, therefore, wish to verify warmly commend Biafrans, Southeast Governors, Gov. Ifeanyi Okowa, friends and lovers of Biafra freedom who made the exercise a huge success.

“The unprecedented success and total compliance that greeted the exercise have sent panic waves down the spine of our oppressors.

“Now they understand how prepared we are in our irrevocable resolve to restore Biafra republic.”