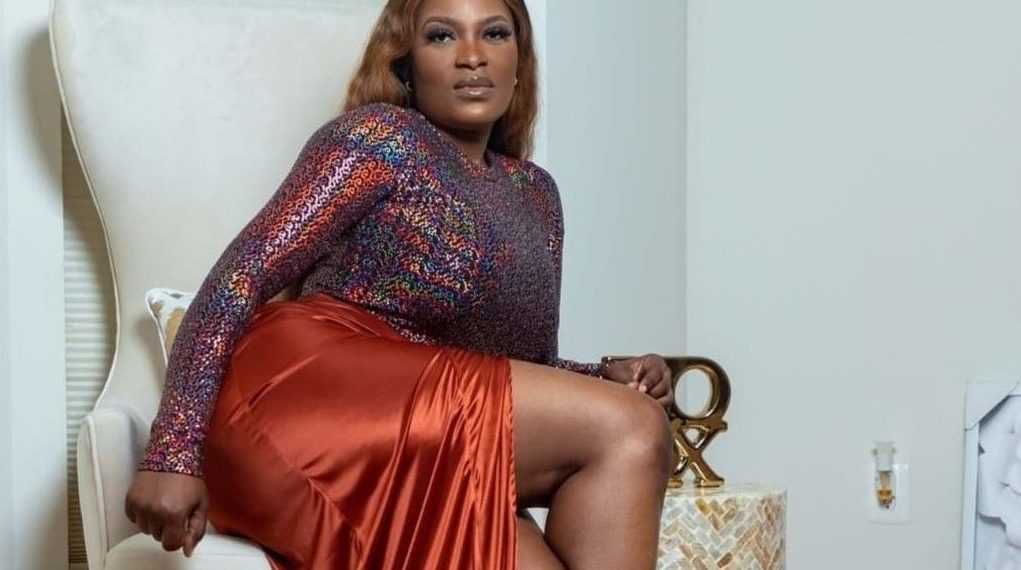 Pero Adeniyi, the dark-skinned beauty, and mother of superstar musician, Innocent Idibia aka 2baba’s three children, has remained a constant in his life for nearly two decades.

Sumnbo Adeoye nee Ajaba and his legal wife, Annie Macaulay, an actress, both bore him two children each.

Ms Adeoye has been married to the General Overseer of Christian Royal Center, David Adeoye, since 2013.

Ms Adeniyi had dominated the singer’s life for nearly two decades that many thought she would end up becoming his legal wife.

In a surprise move, the veteran singer married Macaulay instead at a glamorous ceremony in Dubai in 2012.

Adeniyi, who is the founder of ‘A life Alive Kidney Foundation’, occasionally makes the news but trended on Friday for the wrong reasons.

She has also been forced to set her Instagram page private to avoid the prying eyes of nosy fans.

This was after 2baba’s actress wife claimed that her husband ‘‘slept under the same roof’’ with her (Ms Adeniyi) and her children (Adeniyi’s children ) when they vacationed in Disneyland, U.S.

Neither 2baba or Adeniyi is yet to react to the allegations, but the singer’s brother, Charles, has waded into the matter.

Accusing his brother’s wife of drug addiction, Charles noted that she must have taken the wrong drugs from her ‘dealer’ to have come online to talk in that manner, of her husband.

READ ALSO:  Confusion as 2baba apologises to wife on Twitter

Adeniyi, 43, who is based in the U.S., is the daughter of a wealthy Nigerian businessman, Jide Adeniyi.

A renowned makeup artist, she shot into the limelight after her affair with 2baba became public knowledge in 2005.

2face dated Pero in 2005 after an armed robbery attack in his then Festac apartment left him and his siblings injured and traumatised.

Interestingly, Macaulay, who has known 2baba since she was 15, was also in the picture at the time. Macaulay welcomed their first child, Isabelle, in December 2008.

Amidst a very turbulent relationship, Adeniyi gave 2baba three children (two boys & a girl). She also has a 20-year-old daughter from a previous relationship.

Clearly a thorn in Macaulay’s flesh, she has remained a major reason why she (Macaulay) has had ‘sleepless nights’.

And several instances abound. Nonetheless, there has been a lot of drama between both women in the past couple of years.

Recall that a few years ago, they both fought over this issue of vacationing.

In July 2018, Macaulay made a post on Instagram appreciating estranged couples who are co-parenting and “Who don’t stress the other parents overseeing their kids’’.

Adeniyi’s relative, Eniola Titiloye, hit back at Macaulay calling her a hypocrite who harasses Adeniyi any time 2baba tries to check on her( Adeniyi’s) kids.

Three years earlier, Adeniyi broke the internet when she posted pictures of herself and 2baba kissing passionately at his Rumours night club. The pictures went viral.

It marked the beginning of their unending rivalry while their frosty relationship took a front burner. Macaulay became the butt of Internet jokes and was compelled to issue a statement.

“ I am aware of the photos circulating the Internet with my husband and Pero Adeniyi. …Pero Adeniyi and this momentary indiscretion pose no threat whatsoever to my relationship with my husband. As a matter of fact, for all of our children’s sake, I do encourage cordial relationships with parties involved.”

This year, my focus is solely on God, family, and my career which doesn’t give me the luxury of paying attention to any distractions,” Macaulay said in a statement at the time

For many years, Adeniyi was believed to be 2baba’s first baby mama but her father would later set the record straight in a 2019 interview with Asabe Afrika TV.

Mr Adeniyi sort of defined her daughter’s relationship with 2baba in the interview. He said his daughter “brought 2baba into his life” when she described him as her “man”.

He also claimed that 2baba was married to his daughter but went on to marry another woman (Macaulay) despite the fact that she gave him his first three children.

Also in the interview, he described her as very enterprising and business inclined.

Prior to their infamous ‘public’ reconciliation at the Crescendo Lounge in Ikeja, Lagos, in November 2018, Adeniyi and Macaulay were erstwhile sworn enemies.

2Baba broke down in tears after his wife and his first baby mama settled their rift.

While the circumstances around the reconciliation at the time remain unclear, 2baba could be heard in the video expressing how happy and moved to tears he was as a result of the two women patching up a longtime feud.

Both women finally hugged each other to the delight of guests at the event while 2baba’s popular hit track, One Love, played in the background.

The singer wept uncontrollably on Adeniyi’s shoulders before Macaulay stepped in and they all hugged.

Despite all the media attention she has received in nearly two decades, Adeniyi has never granted an interview nor responded to speculations about the status of her relationship with 2baba.

She has never been romantically linked to any man in all these years at least, publicly.

However, she has continued to keep her over 55,000 Instagram followers updated on her life milestones and precious moments.

She also regularly shares photos and videos of 2baba and their children anytime he visits them in the U.S.

Since the latest scandal broke on Friday morning, Adeniyi has gained almost 40,000 Instagram followers and counting.

Macaulay, on the other hand, has gained over 1 million new fans and currently boasts 7 million followers as of press time.