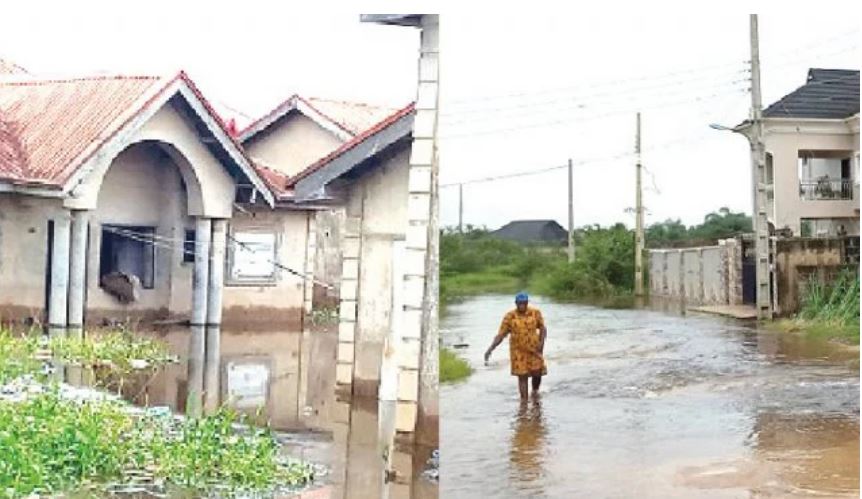 No fewer than 60 landlords and some tenants on Prime View City Estate, Arigbede, in the Ifo Local Government Area of Ogun State, and its immediate environs have been sacked by flood.

It was gathered that the flood, which had continued to surge for over a week, was as a result of the steady release of water from the Oyan Dam in Ogun State.

In Arigbede, it was gathered that while some tenants moved to their churches and other areas, their landlords relocated immediately to guest houses where they hoped to stay for at least two months when the flood would have receded.

PUNCH Metro during a visit to the area observed that the entrance to the PVC Estate was flooded, even as 70 per cent of the houses inside the estate were abandoned by their owners.

Shola, a tenant in Arigbede, told one of our correspondents that some of the houses inside the estate were occupied by only the landlords and their families, adding that only few of them took in tenants.

He explained that while some of the landlords left on Saturday when they noticed the flood surging towards their buildings, others joined the exodus on Sunday and Monday.

He said, “Most of the people, including tenants staying on the estate have packed out; more are still leaving because of the flood. The PVC, Phase 3 Estate, is the worst hit. Over 60 houses have been abandoned by their owners.”

A landlord, who identified himself only as Ikechukwu, who was seen leaving the estate with his family, said nobody informed him that the place was always flooded at a point every two years.

“I am packing my belongings because the flood is much. Over 50 houses are affected by the flood. Nobody told me that the place was flood-prone before I bought the land and erected a building there. I have been here for the past five years.

“The flood also affected me two years ago; I left and came back. I am leaving with my wife and children. I am going to look for accommodation where my family can be safe,” Ikechukwu said.

A mother of three, who simply identified herself as Victoria, told PUNCH Metro she left her house in Arigbede, where she was a tenant, to take refuge in a church.

She said, “When I came in January, I never knew there was a problem of flood. But a woman later told me that the place was flood-prone. She then showed me marks of the last flood on the wall. I was scared.

“But I met a security man who told me there was nothing like flood in the area. I later asked the caretaker, who explained that it was before and that nothing like that would happen because necessary measures had been put in place.

“However, we saw the flood around 3pm. Before 9pm, the flood had reached half of the house in length. So, I decided to leave with my children to our church because we did not know what would happen before daybreak.”

Also, a landlady close to PVC estate, Mama Folake, said the last time they experienced flood was in 2019 when the Oyan Dam was opened, disclosing that at a point, canoes were used to convey people from the flooded area to higher grounds for N200 per head.

“But pupils paid N100 for a trip from Banku and Prime View City, Phase 3, to higher grounds in Arigbede or beyond. It used to be free, but when the flood increased and the water level became higher, people were compelled to pay. The flood has already taken over Greatness Garden in Banku. We can’t get to Banku from where we are now because of the flood,” she added.

She disclosed that the flood would soon get to a level where the Airtel mast would be put off, while the electricity distribution company would also stop supplying electricity to the area to avoid electrocution of any person.

Mrs Ogechukwu, a landlady living close to PVC Estate in Arigbede told PUNCH Metro that the flooding of the area was always happening every two years.

“This year, most of those affected began to leave immediately they saw the signs. There was no flood last year and this encouraged many people to continue to erect buildings almost everywhere on the estate.

“But why will the government open two phases of the Oyan Dam? We learnt there are four phases of the dam. It is not fair. We don’t have a government; we only have God,” she added.

The Ogun-Osun River Basin Development Authority said it notified stakeholders, including the state government and the people, before it began releasing water from the Oyan Dam.

The Special Adviser to the Ogun State Governor on the Environment, Ola Oresanya, said the state had advised residents in lowlands to vacate.

He said, “We started preparation early; we advised our people, the vulnerable ones, to move out of the place.

“Those that will be impacted negatively are those that are farming by the river and doing some other things there and we have asked them to move away from the river bank.”

Meanwhile, the Lagos State Government on Tuesday alerted residents, especially those in areas contiguous to the Ogun River, about the continuous steady release of water from the Oyan Dam, urging everyone to be on standby.

In a statement by Kunle Adeshina, Director of Public Affairs, the state Commissioner for the Environment and Water Resources, Tunji Bello, said officials of the state had been monitoring the release which was earlier announced through an advisory.

He listed areas where the release of water was felt as Isheri North, Kara, Itowolo, Ajegunle, Majidun and Ogolonto.

Specifically, he said residents who live in the downstream of Isheri Olofin up to part of Agboyi would experience flooding as earlier alerted.

Bello stressed that similarly, Onikoyi/Agelete community at Iba New Town at Iba LCDA were also experiencing flooding due to their closeness to the Yewa River.