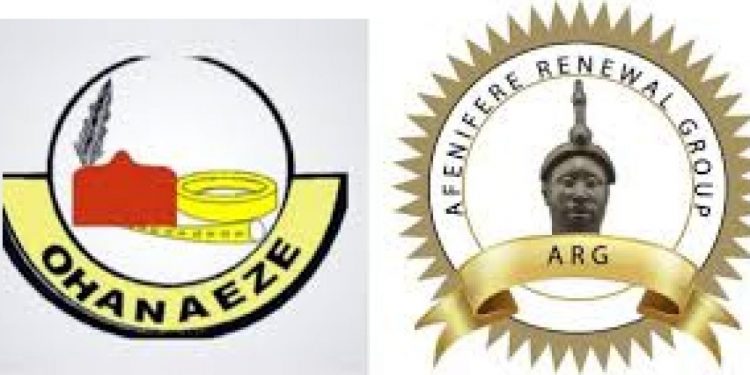 Middle Belt Forum (MBF) and Ohanaeze Ndigbo have slammed northern governors and traditional rulers for opposing power rotation, saying it was strange that the region under whose leadership Nigeria has continued to perform woefully would contemplate the idea of retaining power beyond 2023.

The Northern Governors’ Forum (NGF) and Traditional Rulers’ Council after a meeting in Kaduna on Monday had declared that it was opposed to power rotation because the Nigerian constitution does not provide for it.

But responding to this position, MBF said it was shocking that instead of harping on the bloodshed ripping across the country, northern governors and traditional rulers were concerned with which of the zones would take over power in 2023.

On its part, the apex Igbo socio-cultural organisation described the northern governors and monarch’s position as indicating  a bleak future for Nigeria. It also expressed regret that the north was “undisturbed that Nigeria is fast collapsing under its leadership.”

National President of MBF,  Dr. Pogu Bitrus, in a statement, said it was in the best interest of equity and justice for President Muhammadu Buhari to hand over power to a candidate from the Middle Belt or  southern Nigeria.

“We have been consistent in insisting that for equity and justice to hold sway, power rotation is irrevocable. We deplore a situation where the Middle Belt is completely excluded in the power sharing arrangement in the country. We have called and demanded that the 2023 Presidency be zoned to the Middle Belt. In the event that such demand is unrealisable, all ethnic nationalities of the Middle Belt region are resolved to support any presidential candidate from the South. The best the present administration of President Muhammadu Buhari should do now is to prepare ground for the conduct of transparent polls that would either usher in a presidency to be headed by a Middle Belter or Southerner. Anything short of that is unacceptable to the Middle Belt peoples.”

It lamented that the last six years of northern leadership has brought Nigerians to a catastrophe that is unprecedented.

“Not only has the prosperity for a bright tomorrow retarded, insecurity, unemployment and other societal vices have left its toll on national life. We find it incomprehensible to understand the basis upon which the North is clamouring for power retention.  By 2023, the North should have forfeited all moral rights to retain power in line with the zoning arrangement of political parties.  We cannot allow the North which is now throwing decorum into the air and continue to pursue a selfish agenda that could capsize the ship of the Nigerian State.”

Similarly, Ohanaeze in a statement by its National Publicity Secretary, Alex Ogbonnia, expressed shock that leaders of the North had failed to recognise that Nigeria, at the moment, was confronted with the most precarious omens full of uncertainty, doubts, insecurity and bloodshed, and instead of seeking solution, they were busy strategising on how to hold on to power in 2023.

Ohanaeze recalled that the issue of the presidency shifting between north and south was a gentleman agreement reached between the two regions in 1998 and wondered why the north which had enjoyed the cruise  would want to sink the ship.

“Northern governors, the Sultan and the emirs instead of seeking solution to Nigerian problems were busy strategising on how to retain power in 2023. This is most unconscionable, to say the least. Let it be made abundantly clear that if Presidency is a panacea to people’s problems, the North would have become the Netherlands of Africa. This is because the north had Abubakar Tafawa Balewa, Yakubu Gowon, Murtala Mohammed, Shehu Shagari, Muhammadu Buhari, Ibrahim Babangida, Sani Abacha, Abdulsalam Abubakar, Musa Yaradua, Muhammadu Buhari, yet the problems of the north are on the increase.

“The position of the southern governors is simply restating the obvious. A gentleman agreement was reached at the NUC Conference Centre, Abuja in 1998 between the North and the South. The late Dr. Chuba Okadigbo spoke for the entire south and Alhaji Abubakar Rimi also of blessed memory spoke for the north. It was agreed that after Gen. Abdulsalam Abubakar as Head of State, that the presidency should shift to the south. That accounted for the emergence of the presidential flag bearers of the mainstream political parties from the South West. Chief Olusegun Obasanjo respected the agreement,  handed over to the north in the person of Musa Yar’Adua. Again, Goodluck Jonathan, a southerner, respected the gentleman agreement, handed over to the north in the person of President Muhammadu Buhari. Therefore, the least that is expected from the north is a show of profound gratitude to the entire south for their large heart, equanimity and sportsmanship.

“Nigeria has two major groups of people. Those that cherish the corporate existence of Nigeria on one hand, and those that do not value the unity, peace and progress of Nigeria on the other. The latter indulge in reckless nepotism, ethnocentrism, avarice, supremacist mentality, hollow expansionism and poor judgment of history. It is the law of nature that light illuminates and that in religion, both the Lord Jesus Christ and Prophet Mohammed stood for truth.”

Ohanaeze asked the Peoples Democratic Party (PDP) to be wise and not think it could regain power from the All Progressives Congress (APC) in 2023 by zoning the presidency to the north.

It informed the PDP that it would be wrong to zone its ticket to the north given that from the late Dr. Alex. Ekwueme, the South East people had carried the party on their shoulders and ensured its successes in polls in the region.

“The exponents of this agenda, in their jaundiced calculations, believe that it is a sure way of regaining power from the All Progressives Congress (APC). Experience would have taught them that to zone their presidential position to the North is an orchestrated requiem for the party; because more PDP Governors and grassroots will surely desert them.

“May we remind the PDP that the South East has made unquantifiable sacrifices for PDP beginning from the time of Dr. Alex. Ekwueme. If by way of politics without principles, the southerners in PDP place their personal narrow interests over the interest of their people, the verdict of history will surely be harsh on them.”

Pan-Yoruba organisation, Afenifere and Senator Shehu Sani, chairman, Committee on Local and Foreign Debts in the 8th National Assembly both asked the northern governors to respect the power rotation agreement.

In a statement by its National Publicity Secretary, Jare Ajayi, Afenifere accused the northern governors of insincerity in their utterances.

“As far back as February 2020, Governor Nasir el Rufai of Kaduna State said openly that there was nothing wrong in the presidency returning to the south in 2023. In July this year 2021, he not only reiterated this position but also said fairness and justice demand that the south should produce the president in 2023. Five other governors from the same northern zone supported Rufai’s position on this matter. This new position by the said governors indicated that they were not sincere when they expressed their opinion earlier on.

“While Afenifere concedes that presidential material can come from any part of the country, equity, fairness and justice demand that the next occupant of the exalted office must come from the South since the North would have occupied that office for unbroken eight years by 2023. It is by so doing that unity and sense of belonging the country needs would be fostered.”

Sani said though the rotational presidency is not constitutional, it is necessary for peace and unity. He cautioned both the northern governors and their southern colleagues to watch their utterances to avoid throwing the country into crisis with the agitation for power shift.

He berated the northern governors for preoccupying themselves with where the presidency should be zoned in 2023 when their states were in turmoil.

In the view of member of the House of  Representatives, Chinedu Ogah, the five eastern states of the country should lobby other zones to produce the next president.

Ogah, who represents Ikwo/Ezza South federal Constituency of Ebonyi State, said the South East states alone did not have the capacity to clinch presidency without the support of other states and zones.

“I want our people to understand that it is not about Igbo presidency, it is about the president of the country. I am supporting a south eastern person to be president and we are begging that the position should be zoned to South this time around. When it is zoned to south. The south will be able to meet to zone it to where it has not gone.

“It is not about Igbo presidency because we don’t have Igbo president in the constitution, what we have is the President of the Federal Republic of Nigeria and that is what is contained in the constitution. We should lobby other zones to get south east president because the five eastern states  cannot win the position without the support of other zones. We should be appealing to other states and zones to give the five eastern states a chance to produce the president of Nigeria and not Igbo President,” he said.

The Northern Youths Council of Nigeria (NYCN) cautioned governors not to set the country on fire over their recent divisive positions on which region should produce the next president.

NYCN, in a statement by Isah Abubakar and Mock Samuel Kure, president and director general of media and publicity respectively, noted with “grave concern” the war of words between northern and southern governors’ fora over zoning or otherwise of presidency come 2023

“It is a common knowledge that most of the leaders sending threat on media won’t be here when things spiral out of control. Whether the next president comes from the North or South, it is the same elite from both regions that will derive maximum benefits from the system while the poor man’s challenges will always dwell with him. Therefore, our governors should channel their energy towards developing their various states and coming with formula on how they  lift poor Nigerians from the current challenges of poverty, insecurity and total hopelessness rather than trying to further set them against one another along regional, religious and tribal lines.”

PVCs: Peter Obi insists over 3 million Nigerian students must be allowed to vote