Home Cryptocurrency How to Invest in Crypto Without Buying Any 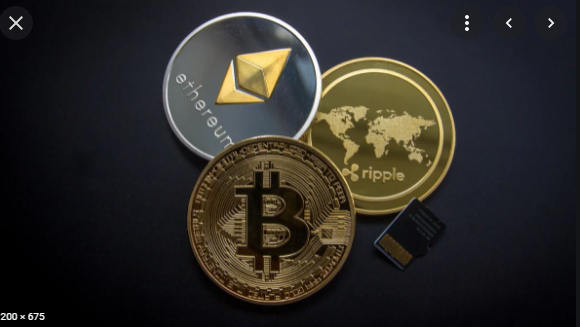 (AP) — Cryptocurrencies are inherently cryptic — it’s right there in the name. And if you follow Warren Buffett’s advice to never invest in businesses you can’t understand, it may be hard to justify investing in a currency made of math instead of gold.

But it’s also hard to ignore some cryptocurrencies’ astounding performance : The price of one bitcoin jumped from just under $5,000 in March 2020 to over $60,000 as of this April.

The excitement surrounding digital currency may leave some investors feeling like the lonely kid at the pool party, wanting to join their friends having fun in the deep end, but too nervous to jump in.

For those investors who are cautiously curious, here are ways to gain exposure to cryptocurrency without buying it, and if you do decide to purchase, how to lower your risk.

Think of this strategy as cryptocurrency investing once removed. Some publicly traded companies have cryptocurrency holdings. And because they are betting on its success, you can too, with those companies acting as a buffer.

“When you’re thinking about investing in a company because they have exposure to crypto, it really runs the gamut from how direct or indirect you are in terms of that exposure,” says Douglas Boneparth, a certified financial planner and president of Bone Fide Wealth in New York City. “It just depends on how much of their balance sheet is in crypto.”

Checking a company’s balance sheet can be revealing: As of June 30, 2021, Tesla held $1.31 billion in digital assets. And while the tech giant has received lots of media attention for its investment, that $1.31 billion currently equates to only about 2.4% of Tesla’s total assets . But if those assets balloon in value, as cryptocurrency is sometimes wont to do, Tesla’s stock value could too.

Another way to gain exposure is to invest in companies that have a stake in the cryptocurrency industry. Coinbase is a platform where investors can buy and sell cryptocurrency — and it’s publicly traded .

“Just like you have with gold, you can either invest in the commodity itself or the infrastructure around it, the miners, the materials needed for mining, same with energy and oil,” Boneparth says. “And there are public companies that are specifically operating in the blockchain space, but there’s not many of them.”

GET READY FOR A CRYPTOCURRENCY ETF

While there are currently no cryptocurrency exchange-traded funds that have been approved by the Securities and Exchange Commission, there is demand for them. A cryptocurrency ETF would operate much like any other ETF, but instead of tracking a market exchange like the S&P 500, it would track a cryptocurrency. For instance, a bitcoin ETF would track the price of bitcoin.

Your guide to a life well spent

“There’s been many different attempts at ETFs and many of these have been rejected. There are ETFs in other countries for bitcoin that have been permitted, and I think it’s just a thing that will happen in time,” says Tristan Yver, the head of strategy at FTX.US, a U.S.-regulated cryptocurrency exchange. “I don’t have an estimate of when this will occur, but I do think it’s something that will happen, and I think it’s something that will allow people who aren’t comfortable with investing directly in digital assets to get exposure to bitcoin and other cryptocurrencies.”

There have been numerous applications for cryptocurrency ETFs, and the SEC is expected to decide whether to approve investment manager VanEck’s bid for a bitcoin ETF, which could be the United States’ first such fund, on Nov. 14, 2021.

USE CAUTION IF INVESTING DIRECTLY

If you’re willing to invest in cryptocurrency directly, there are a few ways you can mitigate your risk. One way to do this is to reduce the amount of money you invest. Some credit cards offer cryptocurrency rewards in a similar way as cash back or miles. If you decide to add cryptocurrency to your portfolio by way of rewards, you don’t even have to use your own dollars to do so.

Another way to reduce your risk is to invest in stablecoins, which are similar to traditional cryptocurrencies but are backed by real-world assets, making them less prone to significant drops in value.