Home Cryptocurrency How cryptocurrencies will shape the future of finance: Deutsche Bank report 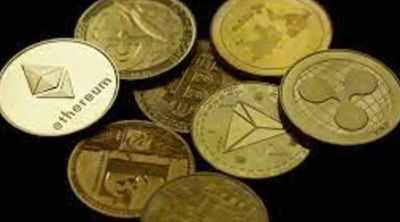 Share
Twitter
Facebook
WhatsApp
Email
Telegram
Timesofindia.indiatimes.com
The $2 trillion crypto economy is impossible to be overlooked, both for the common people and analyst and senior economist at Deutsche Bank Research, Marion Laboure.
She underscored useful insights about the potential of two most important cryptocurrencies – Bitcoin and Ethereum – in shaping the future of payments globally in a recent research-based interview published on the Deutsche Bank website.
Cryptocurrency

The worth of Bitcoin and the challenges faced by the currency in adoption.

In the report, Laboure said that Bitcoin and Ethereum are being accepted in many shops currently but are still not common forms of payment due to the long transaction time and high transaction fee.
Bitcoin takes 10 minutes to validate a transaction with a transaction fee of $20 currently, making it a less popular choice.
On being asked how Bitcoin is different from dollar or any other fiat currency, Laboure said Bitcoin or other cryptocurrencies are not backed by the government, due to which people are not legally obliged to accept it as a means of payment.
According to her, Bitcoin has the potential to become Bitcoin 21st century gold. Like gold, Bitcoin has deflationary properties. It’s not used widely as means of payment and is highly volatile.
She believes that it will be more mercurial in the coming times due to the following reasons :
* About 66 per cent of Bitcoins are used for investments and speculation.* The rare large purchases or market closures can’t affect its supply and demand equation, as Bitcoin has limited tradability.
* Bitcoin’s price is largely influenced by the attitude and approach of the investors and crypto enthusiasts.
Laboure thinks that Bitcoin’s high value and limited stock of 21 million coins makes it a popular hedge against inflation.
If Bitcoin is digital gold, then Ethereum is digital silver :
Bitcoin has the largest market capital and enjoys mainstream institutional support, being the first ever cryptocurrency.
The first runner up, Ethereum leads the market in different ways as it has many practical applications in the blockchain industry, mainly in DeFi and NFT platforms.
Laboure considers Ethereum as digital silver for these distinct application-based abilities of the cryptocurrency. However, there are other cryptocurrencies like Polkadot, Solana, Binance and Cardano that could give tough competition to Ethereum with their smart contracts, according to a Forbes report.
Main demerits of cryptocurrencies
According to Laboure, the two most pertinent issues with cryptocurrencies are:
* The absence of regulation discourages many investors from venturing into the crypto trading market, even though it is attractive and profitable for individual users.
* Crypto mining, that leaves a massive carbon footprint, is worrisome for the environment.
However, she also showed optimism in the latest technological developments to usher in an eco-friendly crypto market. She said that the Deutsche bank analysts expect many countries to have a strong crypto regulatory framework by 2022.
Will Central Bank digital currencies(CBDCs), cryptocurrencies and cash coexist?
CBDCs are fully centralized digital forms of fiat currencies in contrast to cryptos that are completely decentralized and allow each one access to the transaction ledger.
According to Laboure, CBDC, cash and crypto will coexist and one will not replace the other. Since the last three years, governments around the world have been pushing strongly the usage of digital payment options.
Cash payments may in fact decrease with the surge and enforcement of CBDCs and cryptocurrencies.
India is also in the process of enforcing a cryptocurrency regulatory framework and is planning to launch the pilot project of its CBDC soon. .